Alkenes are organic compounds made of carbons and hydrogens. Opposite to alkanes, which have the same components, the general formula of alkenes is not CnH2n+2. Into an alkene, two carbons are bound by a pi liaison (also called double liaison). The smaller alkene is the ethene CH2=CH2.

To make this liaison, each carbon shares 2 electrons, one for the sigma liaison and one for the pi liaison. There are thus two less hydrogens on an alkene than on an alkane in only one pi liaison is present. The general formula is thus CnH2n for a monoalkene and the number of hydrogen is reduced by two for each additional pi liaison.

For larger molecules, the position of the alkene has to be signified in the formula. The alkene is related to two carbons of the chain and is always in the main chain, even if a longer chain could be found.

Is the but-1-ene. The nomenclature is thus that the suffix –ane from the alkanes is removed and replaced by the suffix-ene, itself preceded by the position of the carbon wearing the functional group.

A carbon sharing a double liaison is bound to three other atoms, and not 4. As a result, the tetrahedral structure of the carbon is no more the most stable structure to adopt in the case of alkenes. To have an optimal distance between the atoms/liaisons, all three liaisons are in the same plane. The angle between liaisons is close to 120°. The double liaison takes just a bit more space that the simple liaisons.

The pi liaison is less energetic than a sigma liaison but is strong enough to forbid the rotation of hydrogen atoms around the axe C=C. The pi liaison is a liaison between sp2 electrons. Those electrons are located perpendicularly of the plane of the molecule.

It also means that the atoms/chains connected to the double liaison stay in a fixed position with each other. And that we can specifically name the compounds based on their connectivity.

Let’s take an example to explain how to name alkenes with substituents on the double liaison.

This alkene wears a Bromine, a fluorine, a hydrogen and the rest of the carbon chain. To name this substance, we look at the atoms directly connected to the carbons wearing the pi liaison. A priority is determined for each of the two carbons. It goes to the atom with the larger atomic weight. In this case, Br>F>C. Two substituents are made of carbon. If a a priority was to be determined between them, we look at the atoms they are wearing and, again, the priority goes to the carbon wearing the atom of larger atomic weight. The priority is thus Br> F>C2H5>CH3.

Substituents are in cis position when the h igher priority substituent of each carbon are at the same side of the pi liaison. Otherwise the position is trans.

This alkene for example

However this method is limited and a more general method is to be used in the case of  more complex molecules as our example. We use the E,Z system. The priority on the left carbon is Br>CH3. On the carbon of the right, F>C2H5. If the subsitutes of higher priority are at the same side of the double liaison, the molecule has a configuration Z (for Zusammen, together in German). If they are on the opposite sides the configuration is E (for Entgegen, opposite in German).

The molecule of our example is thus named (E)-2-Bromo-3-Fluoropent-2-ene.

Alkynes are characterized by a triple liaison: one sigma liaison and two pi liaisons. They have a linear geometry. 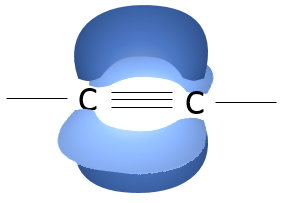 A chain possessing one pi liaison (double or triple) can be called monounsaturated, possessing two of them – biunsaturated-, or many -polyunsaturated. We often hear these terms about fatty acids from butter, oil or food. Having a high degree of unsaturation limits the mobility of a chain and different chains slide along each other with less friction than between saturated chains. It makes unsaturated substances more malleable than saturated ones. For example, unsaturated oils are less viscous than saturated oils.