Other than alkanes, alkenes, alkynes and halogenoalkanes, there is a large number of functional groups that can be found in organic chemistry. In this first year, we will only take a look on the richness of possibilities that organic chemistry allows through the functional groups a carbohydrate chain can wear, and of some of their properties. We will not yet talk about their reactivity or how to produce them.

Basically, the major atoms in the living, and in organic chemistry, are C, H, O and N. Functional groups are usually made of O or (/and) N, but sometimes other atoms are to be considered.

There is a lot of different functional groups containing Oxygen atoms. If both N and O are in a group, I placed this group in the N based group section.

Alcohols are molecules wearing a OH group on a carbon.

Nomenclature: add –ol preceded by the position of the group. For example ethanol, propan-2-ol, ethan-1,2-diol.

The alcohols can be subdivided in three groups based on the numbers of chains on the carbon wearing the alcohol:

Primary alcohol: One chain is bound to the carbon. The general formula is R-CH2OH.

Secondary alcohol: Two chains are bound to the carbon. The general formula is R1,R2-CHOH.

Tertiary alcohol: Three chains are bound to the carbon. The general formula is R1,R2,R3-COH. 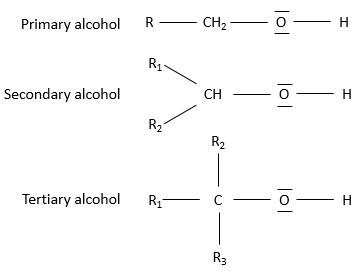 Alcohols are weak acids (pKa~16-18). The acidity decreases from primary to tertiary alcohols because the chains share their electrons by inductive effect toward the O. The charge of the conjugate base of the alcohol is thus increased by the presence of chains on the carbon. A larger charge means that the conjugate base is less stable, and will be less probably produced by the dissociation of the proton. Therefore the decrease of acidity. Moreover, the chains increase the size of the molecule, what decreases the solvatation of the ion. That also decreases the acidity of the alcohol.

They are good nucleophiles: The lone pairs of the oxygen can attack electrophile targets.

An ether is a group in which an oxygen atom is connected to a second chain: R1-O-R2. Note R1 may be the same than R2, giving a cyclic chain with a heteroatom (=O).

In general, ethers are volatile and have a low boiling point.

They can be protonated, then form a good leaving group for a SN2. Ethers are often used to protect a group that we don’t want to substitute: form the ether, proceed to the substitution in basic conditions, and remove the ether.

A ketone is a double liaison between a carbon and an oxygen, in the middle of a chain: R1-C(=O)-R2. 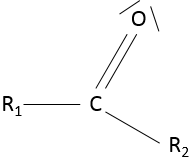 Nomenclature: the name of the corresponding alkane with the suffix –one. For example, CH3COCH3: propan-2-one. Note that for this particular compound, a common name is preferred: acetone.

There is a dipole between the C and O of the ketone. The C is electrophilic while the O is nucleophilic. The oxygen can also accept hydrogen bonds.

Keto-enol tautomerization: if a hydrogen is on an adjacent carbon of the ketone, a resonance form exist for the ketone, catalysed in acidic of basic conditions

Because of this process, ketones are acidic (pKa~20): the resonance form stabilizes the negative charge of the conjugate base.

An aldehyde is similar to a ketone except that it is at the end of one chain: R-C(=O)-H. 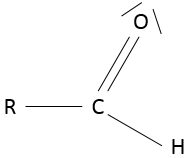 Nomenclature: the name of the corresponding alkane with the suffix –al, for simple alkane chains or –carbaldehyde for more complex molecules. If another functional group is already responsible for the suffix of the name (an alcohol for example), the prefix formyl is used instead. The COH extremity is also called a formyl and the smallest aldehyde, HCOH is called formaldehyde.

A carboxylic acid is a ketone bound to an alcohol: R-C(=O)-OH 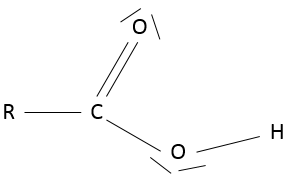 Nomenclature: the name of the corresponding alkane with the suffix –oic acid. Examples: butanoic acid, propanoic acid. However, there are several common names for some carboxylic acids, derived from what we saw for the previous functional groups: formic acid (HCOOH, from insect stings), acetic acid (CH3COOH), butyric acid (CH3(CH2)2COOH, from butter) and many others.

Obviously, carboxylic acids are acid. They are more acid than alcohols and very acidic with regards to the other organic compounds. While alcohols have a pKa~16-18, smaller than the pKa of water, the carboxylic acid is a weak acid, with pKa between 3-5. This acidity comes from the resonance forms of the carboxylate, the conjugate base of the acid:

The carboxylic acids are polar and soluble in water (and polar protic solvents), but also in nonpolar solvents: two acids can form a nonpolar dimer by hydrogen bonding.

An ester is the combination of a carboxylic acid and an alcohol (and it is technically how we can produce esters): R1-C(=O)-O-R2.

Nomenclature: the main chain is the one wearing the carboxylate (R-C(=O)-O-) and is named with the suffix -oate and the rest of the chain is a group. Examples: Ethylethanoate (or ethylacetate), propyloctanoate.

Esters are polar and can accept hydrogen bonds.

It is not really a type of group, but more like a modification of existing groups characterised by the bonding of two oxygen atoms.

The peroxide itself is the modification of an ether: R1-O-O-R2.

Hydroperoxide is the peroxide of alcohols: R-O-O-H.

As for the oxygen, the azote is an inductive acceptor and a mesomeric donor.

Nomenclature: Whether use the prefix amino- or the suffix –amine. Examples: methylamine, 2-aminohexane.

Good nucleophiles, depending on the number and the lengths of the bound chains.

Except the quaternary amine, the azote has a lone pair and can oscillate between two conformations.

Amines are bases: the lone pair can accept a proton. The basicity depends on the steric hindrance (and therefore solvatation of the ion) and on the nature of the chains. Alkyl chains are enhancing the basicity (by induction) while aryl chains (an aromatic chain, see next chapter) are decreasing the basicity (by mesomeric donation).

A nitro group is composed of an azote atom and of two oxygen atoms: R-NO2. It is mainly found on aromatic cycles through electrophilic addition (to be seen next year) and not through nucleophilic substitution.

A positive and a negative charge are respectively on the azote and on one of the two oxygen. In fact, there are two resonance forms for the nitro and the oxygen atoms are equivalent.

Nomenclature: The prefix nitro- is added.

Don’t heat too much or too quickly a compound containing nitro groups, especially if there is more than one on the substrate.

Amides are the equivalent or an ester, except that one of the oxygen is replaced by an azote: R1-C(=O)-NH-R2.

Nomenclature: The suffix amide is simply added at the end of the name of the compound. The equivalent of acetic acid is the acetamide.

Amides are the bone structure of peptides 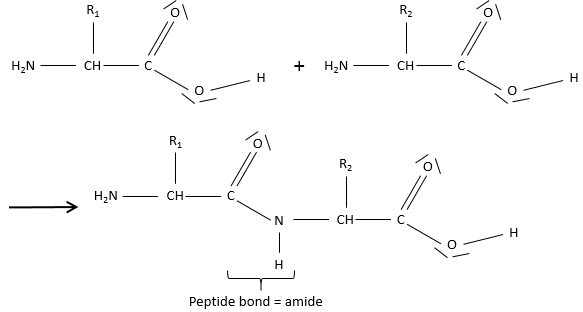 They have a resonance structure, separating the charges, similar to the keto-enol tautomerization

Nitriles are functional group composed of C≡N. In inorganic chemistry, this group is instead called cyanide and is very toxic.

Nomenclature: The prefix cyano- is added to the name of the compound.

They are used to produce carboxylic acids by hydrolysis, or amines by catalytic hydrogenation.

They are also often used to extend a carbon chain.

The carbon is electrophile in nitriles.

Groups based on other atoms

Some other atoms can be encountered in organic chemistry. We will not develop them a lot in this course.