The DNA replication is one of the key mechanisms of  cell cycle. It is a highly regulated biological process in which new synthesis and  repair mechanisms ensure the integrity of the genome.

S phase or replication phase follows the G1 phase during which the cell synthesizes all the elements necessary for this replication. The DNA duplication takes about 8 hours. 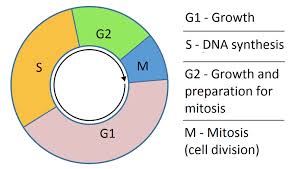 The double helix of DNA is separated into two DNA strands. Each strand is then used as template for the synthesis of a new strand.

Replication produces 2 hybrid molecules formed from a parent strand and a daugther strand : replication is semi-conservative.

b) other proteins are also required during replication

In eukaryotes, replication is initiated at many replication origins called OriC, unlike prokaryotes in which there is a single origin of replication.

Eukaryotic cells must replicate their entire genome for each cell cycle. To carry out this process in a short time, the initiation of replication is made at several OriC or “replication origins” along the chromosome (about 10000) in independent units of replication called replicon (30-300 bp).

In eukaryotes, the best characterized replication origins are those of the yeast. They are named for Autonomously Replicating Sequence ARS. These ARS regions rich in AT, possess fixation sites for the ORC complex.

Then other proteins capable of unwinding the DNA double helix  are recruited (by activation of helicases).

3.2.2.Activation of the pre-replication complex

The unwinding of the DNA and separating of the two strands exposes single-stranded DNA regions, which are stabilized with protein RPA (replication protein A) and accessible to enzymes and proteins required for replication.

4) Recruitment of DNA polymerases and other proteins 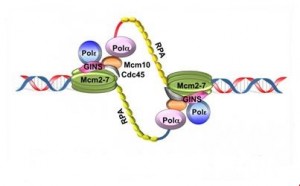 The DNA polymerase α (α- primase) synthesizes primers  which is a short RNA segment (10 base pairs). These short RNA fragments are then elongated by a DNA fragment (20 to 40 nucleotides long). An RNA-DNA primer is created.

A complex RF-C / PCNA (replication factor C/ Proliferating cell nuclear antigen) is fixed on the 3’OH end of the primer RNA / DNA and dissociates DNA polymerase α of the DNA template, leaving instead the DNA polymerase δ which recognizes the complex RFC / PCNA and be responsible for the synthesis of continuous strand.

On the strand with discontinuous synthesis, DNA polymerase α-primase which was previously dissociated, restarts the synthesis of a new primer RNA / DNA. On this DNA strand, the enzyme synthesizes multiple small DNA fragments in the prologation of primers, called “Okazaki fragments” (along approximately 1000 to 5000 nucleotides). 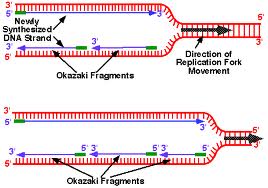 As the progression of the replication goes on :

helicase unwind the DNA double helix and topo- isomerase reduces twisting of the DNA upstream of the forks.

It reconstructs the phosphoester bond between the 3′-OH carbon and phosphate-5′ of two adjacent nucleotides in a DNA strand.

It is also involved in many DNA repair processes.

Type I
– Performs a cut on one of the strands of DNA.

Type I I
– Performs a cut on the two strands of DNA.