Atoms make liaisons because they get more stability. A proof is that to break a liaison, we need to give energy to the molecule.

Atoms in a molecule are at a given distance, and oscillate slightly from this position depending on the energy they receive.

The atoms cannot oscillate at any frequency. There are authorized levels of energy at which the atom can be placed.

Even at n=0, the fundamental state, the atoms oscillates at a given frequency.

It is difficult to approach more the atoms from each other but it also requires energy to pull them away. The dissociation energy is the energy required to separate two atoms by an “infinite” distance.

To form a liaison, the clouds of electrons around the nuclei concentrate between the two nuclei to shield their charge and decrease the repulsion between them. The repartition of electrons differs depending on the type of liaison. New orbitals, molecular orbitals are formed from the atomic orbitals to bind two atoms.

Only the last layer of electrons, the electrons of valence, is taken in account for the molecular orbitals: the inner layers are too distant to interact.

Such a liaison is made between atoms of same electronegativity (or almost). Each atom put one electron in common to make a covalent liaison. The electrons in the liaison are shared equally along the liaison.

As the electrons are not equally shared, a gradient of charge exists along the liaison. We say that there is a dipolar moment.

H and F have different electronegativities (2.1 and 4 respectively). Most of the electrons of the liaison are thus closer to the atom of fluorine than to the atom of hydrogen. 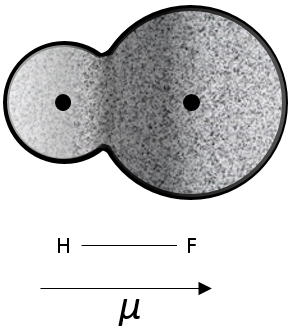 The dipolar moment μ of this liaison can be defined as

By definition, the dipolar moment goes from the positive charge to the negative one. If the charges were completely separated, this moment should be

The value obtained experimentally is 1.83D. It means that the hydrogen does not totally give its electron to the fluorine. The ionic character of a liaison is given by

And if this value is over 50%, we consider that the liaison is an ionic liaison.

Fluorine has the highest electronegativity but has not a polarity large enough to have an ionic bond with the hydrogen (only 41.6%). The reason is that both H and F have a very small radius and that the liaison’s length is thus small and the liaison is strong. It is the reason why HF is a weak acid while the other acids of halogen are strong acids: the negative charge is more stabilised on Cl–, Br– and I– than on F–.

Note that a molecule that has polar bonds is not automatically polar CH4 is nonpolar. The polyfluorocarbon (CF2)n is nonpolar as well.

On jackets, nonpolar molecules are grafted so that rain does not penetrate the jacket but can only roll on it. On a nonpolar surface, water does not spread but restricts its surface at the maximum, forming a sphere.

Rule of the octet and formal charge 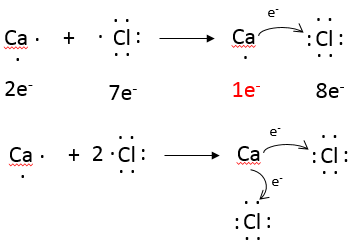 In CO2, the liaisons are covalent and the electrons are shared between C and O. CO2 could possibly have two structures:

One can see that the oxygen’s of the molecule of the left are not equivalent. In a molecule, the electronic distribution has to be the most homogeneous possible. Each atom has a formal charge (FC)

Let’s check the FC of each atom:

The rule of the octet works very well for the three first lines of the Mendeleev table. After that, some empty nd orbitals can be used to bind atoms. For example S can bind 6 atoms of fluor (SF6).

Now, is that molecule really linear, as we draw it? To determine the spatial structure of a molecule, we have to consider the atomic orbitals of each atom and the fact that liaisons are repulsive between each other (they are densely negatively charged). CO2 is thus linear, having an angle of 180° between the two double liaisons to reduce the repulsion between them. CH4 is a regular tetrahedral, having an angle of 109° between each liaison: 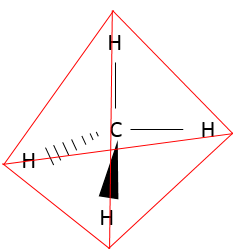 The lone pairs also take space in a molecule. In fact, they take more space than a normal liaison: the electrons are piled up near the atom. As a result, H2O is not linear but is a tetrahedral. Yet, it is not a regular tetrahedron as the angle between the lone pairs (>109°) is greater than the distance between the liaisons (<109°). NH3 is tetrahedral as well but has the specific particularity that it quickly oscillates between two equivalent forms:

We have seen earlier the forms of atomic orbitals (AO) and none of them was tetrahedral. The atomic orbitals mix together to form new molecular orbitals (MO) that are used to bind with other atoms. It is the hybridisation process.

N has 5 electrons of valence: 2 in 2s and 3 in 2p. They merge into 4 sp3 orbitals of equal energy. The exponent 3 on the p indicates that 3 orbitals p were merged with one (not indicated as an exponent) orbital s. As usual, the electrons are placed on all the orbitals before being paired. One orbital contains 2 paired electrons already: it is the lone pair. The three other sp3 orbitals contains 1 electron each. The hydrogen will bring one additional electron on those orbitals to bind and form NH3.

We can do the same for H2O:

The oxygen has one more electron than the nitrogen. It results in a second lone pair and only 2 hydrogen’s binding to O.

Four of the six liaisons are in the same plane and the two others are on each side of this plane. SF6 has thus a octahedral structure.

When two atoms are approaching each other, their outermost atomic orbitals interact to form molecular orbitals. We have seen earlier bonding orbitals but it is not the only possible combination of orbitals that can take place. The combination can either be positive or negative.

Li2 combines the 2s orbitals of each atom. The positive and negative combinations of the wave functions give 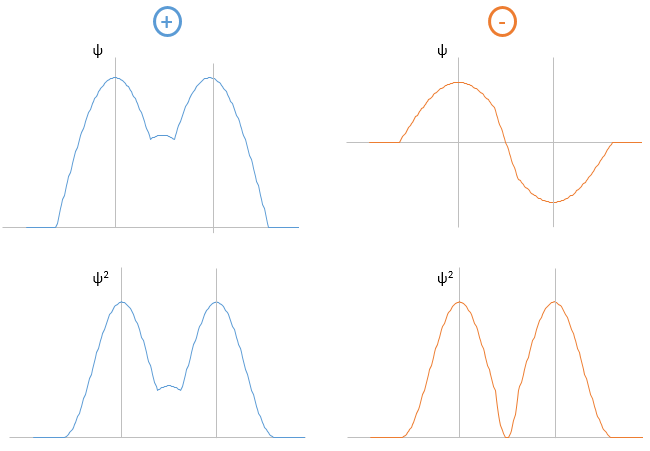 The same kind of bonding and antibonding orbitals exist for the np, nd and nf orbitals. The np orbitals in the direction of the liaison form a sigma orbital and the other np orbitals are responsible for the double and triple liaisons and are called liaisons pi.

The molecular orbitals have different energies and we will now explain how to determine which orbitals are used and which ones are not. 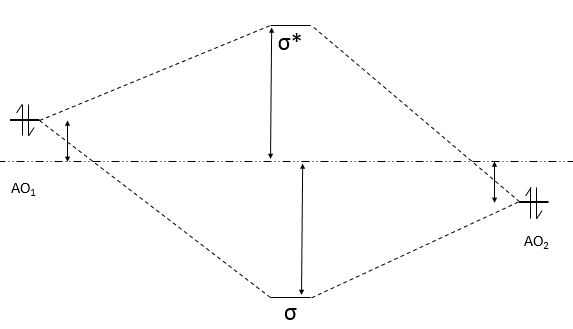 The second step is to distribute the electrons on the MO. The electrons are distributed from bottom to top and each molecular orbital accepts 2 paired electrons. 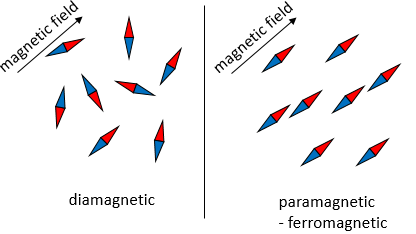 Diamagnetism is the opposition of any particle to a magnetic field. It appears in all materials but is very weak with regards to other magnetic behaviours. As a result, it is only observable in purely diamagnetic materials. To be so, a diamagnetic material has all its electrons paired. The opposite spins of paired electrons cancel the intrinsic electron magnetic moment: electrons are charged species revolving in one direction (spin) around the nucleus and can interact with an external magnetic field.

It is the strongest reaction to a magnetic field and is the property of magnets. As for paramagnetism, unpaired electrons line up with a magnetic field but an additional effect exists for ferromagnetic particles: the aligned, adjacent particles exhibit a magnetic dipole-dipole interaction. Under certain conditions, the orbitals of their unpaired electrons can overlap. As a result, a similar effect than the exclusion of Pauli applies: it reduces the electrostatic energy of the electrons when their spins are parallel and not anti-parallel. The difference of energy between the parallel state and the anti-parallel state is called the exchange energy and defines the strength of the ferromagnetism of a particle.

The colour of compounds comes directly from the difference of energy between the highest occupied molecular orbital (=HOMO) and the one above it (=LUMO, lowest unoccupied molecular orbital). The molecule absorbs light to excite one electron. To jump by one level, the photon must have the same energy that the difference of energy between the levels. It means that only the light of a given colour is absorbed. Because this colour is absorbed, we don’t see it but see the colours that are not absorbed by the molecule.

Fluorescence is the light emitted when an excited electron de-excites to an intermediate level instead of its fundamental level. The emitted colour is thus different than the one absorbed and the process is very slow.

In a metal, all the atoms are bound together. The molecular orbitals merge into a continuum band of conduction. As a result, the electrons are shared by all the atoms in the metal and electons can move along the metal. It is why metals conduct electricity. 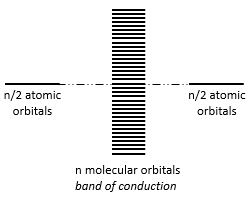 Coordinative liaisons are liaisons made when an atom wearing one (or more) lone pair of electrons uses one pair to bind a cation. 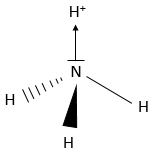 In hydrogen bonds, the cation is a proton. These liaisons are weaker than a normal covalent liaison but can have an important role in the structure of a compound.

The cation can also be a metal of transition. In this case, the bonding molecule is called a ligand. The ligand will target the empty nd orbitals of the metal. The geometry of the resulting compound is tetrahedral or octahedral depending on the generated molecular orbitals.

The atomic orbitals nd splits into two levels of different energy. The lower energy orbitals are dxy, dxz and dyz for the octahedral structure and the orbitals dx2-y2 and dz2 have a higher energy.

It is the opposite for the tetrahedral structures.

The chemistry of coordination is a complex domain of the chemistry and it will be discussed in details in the courses of second year. 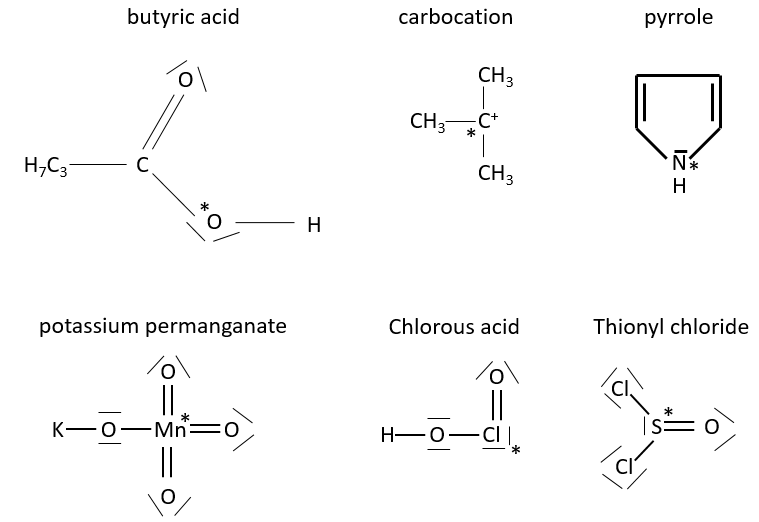 2.  Which of those diatomic molecules are paramagnetic and what is their order of liaison? O2, N2, C2, F2, B2

3.  What is the spatial structure of these molecules?

4.  Explain why SiF4 is nonpolar while the liaison Si-F is polar.

7.  What is the hybridisation of the underlined atoms in these molecules? What is the spatial geometry around them?

2.  Let’s focus on O2 and then extend the reasoning to the other species. Each oxygen atom has 6 electrons of valence. To determine if a molecule is paramagnetic, we need to know if there are unpaired electrons. To do so, we apply the LCAO (linear combination of atomic orbitals).

There are 2 unpaired electrons in the π*2p orbital. O2 is thus paramagnetic. The order of the liaison is given by

For the other species, we can do the same thing. Nitrogen has one valence electron less than the oxygen. The π*2p orbitals are thus unoccupied and N2 is not paramagnetic. The order is (8-2)/2=3.

B2: not paramagnetic, order: 1

4.  The dipolar moments of the liaisons cancel each other.