Liquids are a condensed state: the volume of a liquid does not change by much when a pressure is applied. A liquid is a fluid: it has not its own shape and molecules can move inside it. As said previously, liquids are characterised by a short range order and a long range disorder.

When a droplet of water falls on a metal surface (for example), the droplet does not spread completely. The droplet is not a monolayer of water but has still a characteristic shape and a width.

The shape depends on the interactions between the molecules of the liquid between themselves, their interaction with the molecules of the surface. If the interactions with the surface are stronger than the intern interactions of the liquid, then the droplet spreads on the surface. The surface is said to be hydrophilic if a liquid spreads on it. On the opposite, on a hydrophobic surface, droplets remain in a spherical shape (it is possible to almost have a complete sphere). If the surface is inclined, the droplet will just roll on the surface. With a designed surface, it is possible for a droplet to climb on an inclined surface shaped like a stair (Enhanced Droplet Control by Transition Boiling, Alex Grounds, Richard Still & Kei Takashina, Scientific Reports 2, 720)

To increase the surface (by ΔS) between a liquid and a solid, a work W is required

γ is given for a type of surface, so that it only depends on the interaction between the molecules of the liquid. A small superficial tension means that the liquid will easily spread, that the work to increase its surface with the solid is small.  Oil for example spreads easily on a surface. On the contrary, the mercury has very strong metallic bonds and minimises its surface with the solid. It keeps a spherical form.

It is the ability of a liquid to flow in narrow spaces without external forces, or in opposition to external forces. Typically, if you partially plunge a piece of paper in water, water will move upwards on the paper, despite the influence of the gravity. The capillarity is the resultant of several forces: the adhesion force between the liquid and the surface against the weight of the liquid and the cohesion force in the liquid. On the paper, the water will stop to move upwards when those forces are cancelling each other.

In a tube of glass, the adhesion force is important because the glass possesses O– anions which favour the adhesion. Consequently most of the inorganic liquids climb in a tube, we can see that the surface of the liquid is generally not flat but incurved. It is called the meniscus. The adhesion energy is favourable enough to increase slightly the water-air surface so that the height along the wall is greater than in the middle of the tube. The difference of height can be several millimetres. On a graduated tube, the height to consider is the one in the middle of the tube. 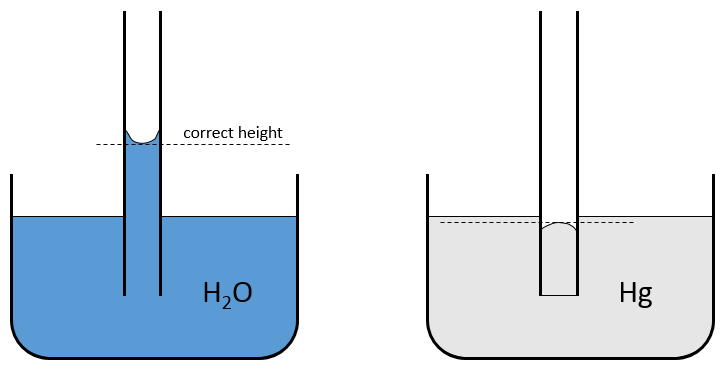 When the adhesion force is smaller than the cohesion force, the level in the tube will be lower than the level of liquid out of it. It is the case for the mercury. Its meniscus is also different from the meniscus of the water as the mercury avoid the contact with the surface.