The sequence of events during meiosis involves two nuclear divisions ( meiosis I and meiosis II ).

In prophase 1 of meiosis, the DNA coils tighter, and individual chromosomes first become visible under the light microscope as a matrix of fine threads. Because the DNA has already replicated before the onset of meiosis, each of these threads actually consist of two sister chromatids joined at their centromeres. In prophase 1, homologous chromosomes become closely associated in synapsis, exchange segments by crossing over, and then separate.

Leptotene: during which each chromosome becomes visible as two fine threads  (chromatids)

Zygotene: A lattice of protein is laid down between the homologous chromosomes in the process of synapsis, forming a structure called a synaptonemal complex. 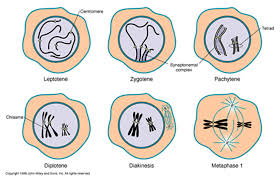 Diplotene: the fourth stage of the prophase I of meiosis, following pachytene, during which the paired chromosomes begin to seperate (the synaptonemal complex disassembles) into two pairs of chromatids.Diplotene is a period of intense cell growth. During this period the chromosomes decondense and become very active in transcription

Diakinesis: At the beginning of diakinesis, the transition into metaphase, transcription ceases and the chromosomes recondense.

Synapsis: During prophase, the ends of the chromatids attach to the nuclear envelope at specific sites. The sites the homologous attach to are adjacent, so that the members of each homologous pair of chromosomes are brought close together. They then line up side by side, apparently guided by heterochromatin sequences, in the process called synapsis.

Within the synaptonemal complex, recombination is thought to be carried out during pachytene by very large protein assemblies called recombination nodules. A nodule’s diameter is about 90 nm, spanning the central element of the synaptonemal complex. The details of the crossing over process are not well understood, but involve a complex series of events in which DNA segments are exchanged between nonsister or sister chromatids. In humans, an average of two or three such crossover events occur per chromosome pair. 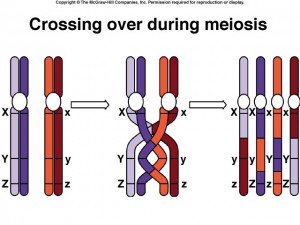 Evidence of crossing over can often be seen under the light microscope as an X-shaped structure known as a chiasma. The presence of a chiasma indicates that two chromatids (one from cach homologue) have exchanged parts. Like small rings moving down two strands of rope, the chiasmata move to the end of the chromosome arm as the homologous chromosomes separate. 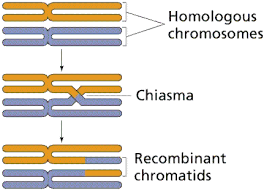 Synapsis is the close pairing of homologous chromosomes that takes place early in prophase 1 of meiosis. Crossing over occurs between the paired DNA strands, creating the chromosomal configurations known as chiasmata. The two homologues are locked together by these exchanges and they do not disengage readily.

By metaphase 1, the second stage of meiosis 1, the nuclear envelope has dispersed and the microtubules form a spindle, just as in mitosis. During diakinesis of prophase 1, the chiasmata move down the paired chromosomes from their original points of crossing over, eventually reaching the ends of the chromosomes. At this point, they are called terminal chiasmata. Terminal chiasmata hold the homologous chromosomes together in metaphase 1, so that only one side of each centromere faces outward from the complex; the other side is turned inward toward the other homologue. Consequently, spindle microtubules are able to attach to kinetochore proteins only on the outside of each centromere, and the centromeres of the two homologues attach to microtubules originating from opposite poles. This one-sided attachment is in marked contrast to the attachment in mitosis, when kinetochores on both sides of a centromere bind to microtubules.

Each joined pair of homologues then lines up on the metaphase plate. The orientation of each pair on the spindle axis is random: either the maternal or the paternal homologue may orient toward a given pole.

Chiasmata play an important role in aligning the chromosomes on the metaphase plate.

After the long duration of prophase and metaphase, which together make up 90% or more of the time meiosis 1 takes, meiosis 1 rapidly concludes. Anaphase 1 and telophase 1 proceed quickly, followed – without an intervening period of DNA synthesis – by the second meiotic division.

In anaphase 1, the microtubules of the spindle fibers begin to shorten. As they shorten, they break the chiasmata and pull the centromeres toward the poles, dragging the chromosomes along with them. Because the microtubules are attached to kinetochores on only one side of each centromere, the individual centromeres are not pulled apart to form two daughter centromeres, as they are in mitosis. Instead, the entire centromere moves to one pole, taking both sister chromatids with it. When the spindle fibers have fully contracted, each pole has a complete haploid set of chromosomes consisting of one member of each homologous pair. Because of the random orientation of homologous chromosomes on the metaphase plate, a pole may receive either the maternal or the paternal homologue from each chromosome pair. As a result, the genes on different chromosomes assort independently; that is, meiosis 1 result in the independent assortment of maternal and paternal chromosomes into the gametes.

By the beginning of telophase 1, the chromosomes have segregated into two clusters, one at each pole of the cell. Now the nuclear membrane re-forms around each daughter nucleus. Because each chromosome within a daughter nucleus replicated before meiosis 1 began, each now contains two sister chromatids attached by a common centromere. Importantly, the sister chromatids are no longer identical, because of the crossing over that occurred in prophase 1. Cytokinesis may or may not occur after telophase 1. The second meiotic division, meiosis 2, occurs after an interval of variable length.

After a typically brief interphase, in which no DNA synthesis occurs, the second meiotic division begins.

Prophase 2. At the two poles of the cell the clusters of chromosomes enter a brief prophase 2, each nuclear envelope breaking down as a new spindle forms.

Metaphase 2. In metaphase 2, spindle fibers bind to both sides of the centromeres.

Anaphase 2. The spindle fibers contract, splitting the centromeres and moving the sister chromatids to opposite poles.

Telophase 2. Finally, the nuclear envelope re-forms around the four sets of daughter chromosomes. 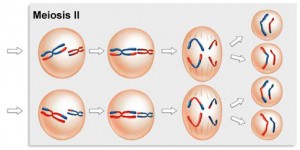 The final result of this division is four cells containing haploid sets of chromosomes. No two are alike, because of the crossing over in prophase 1. Nuclear envelopes then form around each haploid set of chromosomes. The cells that contain these haploid nuclei may develop directly into gametes, as they do in animals. Alternatively, they may themselves divide mitotically, as they do in plants, fungi, and many protists, eventually producing greater numbers of gametes or, as in the case of some plants and insects, adult individuals of varying ploidy.

During meiosis 1, homologous chromosomes move toward opposite poles in anaphase 1, and individual chromosomes cluster at the two poles in telophase 1. At the end of meiosis 2, each of the four haploid calls contains one copy of every chromosome in the set, rather than two. Because of crossing over, no two cells are the same. These haploid cells may develop directly into gametes, as in animals, or they may divide by mitosis, as in plants, fungi, and many protists.