One job of a chemist is to analyse samples of chemicals. To determine the composition of the sample, a separation of the different elements is necessary to avoid interferences between the species.

It can be of importance to determine which chemical elements are present, in which quantities and oxidation state. Several methods of separation can fulfil the needs of the chemist to obtain a good separation. In most of the cases, the sample must be a solution the solvent of which does not contain any interfering species.

The separation methods are based on the affinity of species for different solvents, on equilibrium processes and on kinetics. Some methods allow to get the sample back and some destroy it.

This method is based on the affinity of species with two different immiscible liquid phases. One phase is aqueous and the second one is organic. The experiment is performed in a separatory funnel (or sep funnel). It is a piece of glass or plastic shaped like a reversed cone with a valve on the bottom and an opening at its top. A cap can close the funnel to allow a vigorous mixing. 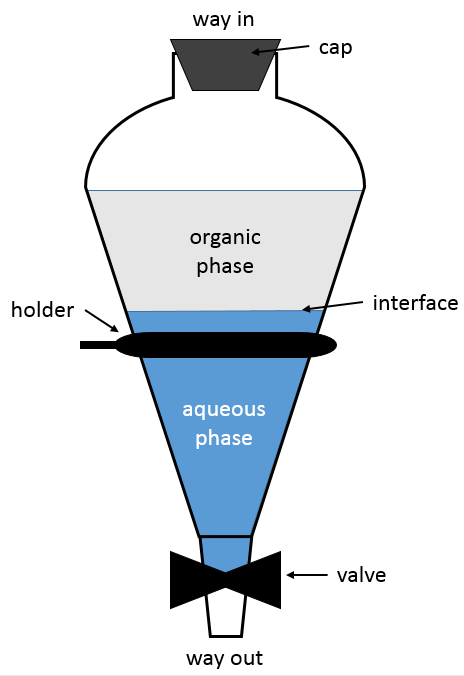 The sample is prepared in one of the two phases and is placed in the extraction funnel by its top opening.  The second phase is added (the order of insertion of the two phases does not really matter). As the phases are immiscible, the exchanges of particles between the phases can only be made at the interface and charged species do not move into the organic phase: their solubility in any organic phase is very low. To improve the exchanges, the liquids are mixed by shaking the funnel and by turning it upside down. It increases the surface of contact between the two phases, thus the exchange is improved. During the mixing phase, it is recommended to open briefly the funnel (by the cap or by the valve) to release an eventual excess of pressure. Remember some security notions: it can be necessary to open the funnel under a hood and do not put your nose or an eye just above the opening when you release the pressure. Next, the system is put to rest until the interface is thin and clear. The phase of lowest density is at the top and the densest is at the bottom. Usually, the organic phase it above the aqueous phase because the density of organic solvents is usually lower than the density of the water (oil floats on water). We can thus remove the aqueous phase out of the funnel by opening the valve at the bottom of the flask.

Distribution of the species

At the equilibrium, each species is distributed between the two phases. We can define a coefficient of distribution KD that is the ratio between the concentration of a species in the organic phase and in the aqueous phase:

If we don’t specifically consider the equilibrium, it is the distribution ratio D.

For the concentrations of the species, we consider all the form of a given species. Reactions often depend on the solvent and may occur in one phase but not in the other one. For instance, an acid in the aqueous phase can be in its acidic form HA or in the conjugated base form A–. The solubility of ions in organic phases being very low, the exchange of species between the two phases is limited to HA. 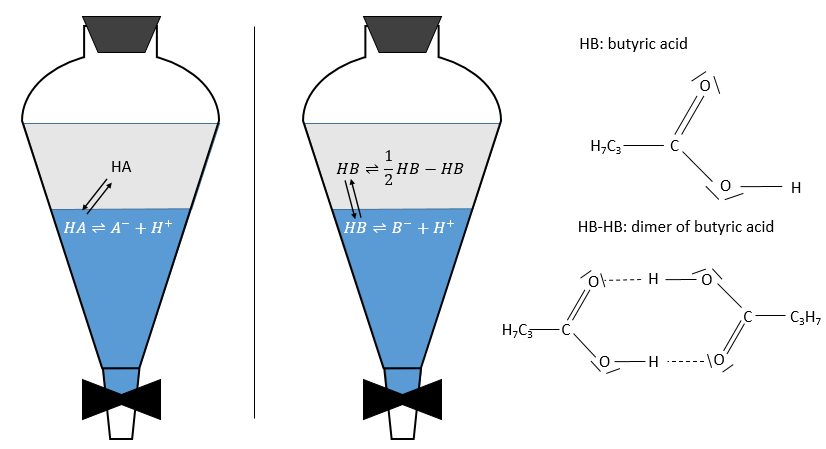 As a result, the distribution ratio may depend on the acidity of the aqueous phase. Equilibrium reaction can also specifically occur in the organic phase, as it is showed with the example of the butyric acid HB (see the right of the previous figure). In the organic phase, this carboxylic acid can form a dimer HB-HB, connecting two HB together by two hydrogen bonds. The dimer is stable in the organic phase but it is not the case in the aqueous phase where the acid can lose its proton. In this case, the distribution ratio will be

The choice of the solvents is thus crucial for a good extraction. The solvents can be polar or nonpolar depending on the separation that has to be done, but they must not be miscible.

To extract an organic compound out of the organic phase, we want to get charged species. The neutral species are shared between the two phases but the ions remain in the aqueous phase. If the compound is not ionisable, we can only play on the nature of the solvent to expect the best extraction, i.e. when KD is small. If the compound can be dissociated, we can tune the acidity of the aqueous solution to optimise the extraction.

Another case is the case of amphoteric species. These species can play de role of a donor or an acceptor of proton. The oxine (8-Hydroxyquinoline) is an amphoteric.

At pH<5, the nitrogen is protonated, giving a positive charge to the compound that can now be extracted. At pH>10, the hydroxyl group loses its proton, leading to a negatively charged species that can also be extracted.

Between 5<pH<10, oxine remains in the organic phase.

The metallic cations can be extracted from aqueous solutions. In this case, we want to obtain a great value of D. To transfer the metals from the aqueous phase, their charge has to be hidden by the formation of strong ionic pairs or by the formation of coordination complexes. The oxine can form a complex with metals to stabilise them in the organic phase. For instance, if we want to extract aluminium from an aqueous solution, the oxine can travel from the organic phase to the aqueous phase. In good conditions of pH, the oxine loses its proton. In its basic form, the oxine forms a complex with the ions of aluminium, a complex that can now be transferred in the organic phase. 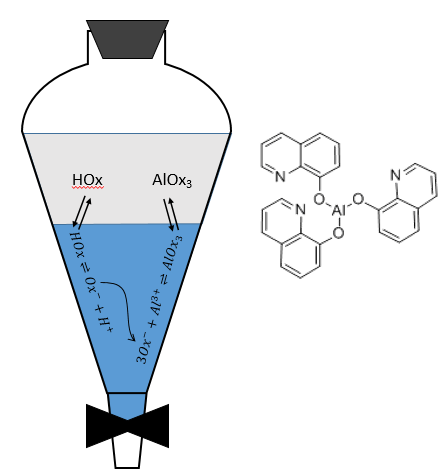 Fe3+ can form an ionic pair in a concentrated solution of HCl.  The ionic pair (FeCl4)–H3O+ can move into the organic phase. Note that this product of the reaction moves out of the aqueous solution. The equilibrium is thus shifted to the right.

One can see that the extraction of Pb starts at pH>6 while Ag is already fully extracted at pH=3. The separation of Cu (II) from Ag will require another method of separation. 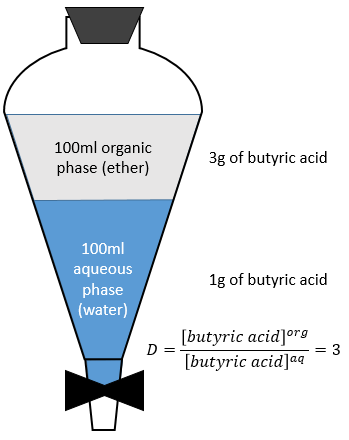 We can conclude that an extraction has better results when D or RV is large.

Now if two compounds A and B are to be separated, we have to design the experiment such as the multiplication of DA by DB is equal to 1. Indeed, if DA and DB are large but DA>>>DB, the separation will not be efficient. Image that DA=1000 and DB=20. A has a better extraction than B, but both species are extracted: the extracted fractions are, considering identical volumes of phases

To obtain a better separation, we can repeat the extraction starting with the organic phase we just extracted. Let’s come back to our first example of the butyric acid. For this compound, we had found D=3. We can play on the volumes of the phase to modify the efficiency of the extraction. If we put half the volume of ether, then RV=0.5. The extracted fraction will be

This method has been optimized into the apparatus of Craig. Dozens to hundreds of H shaped tubes are connected. The next figure shows one tube. 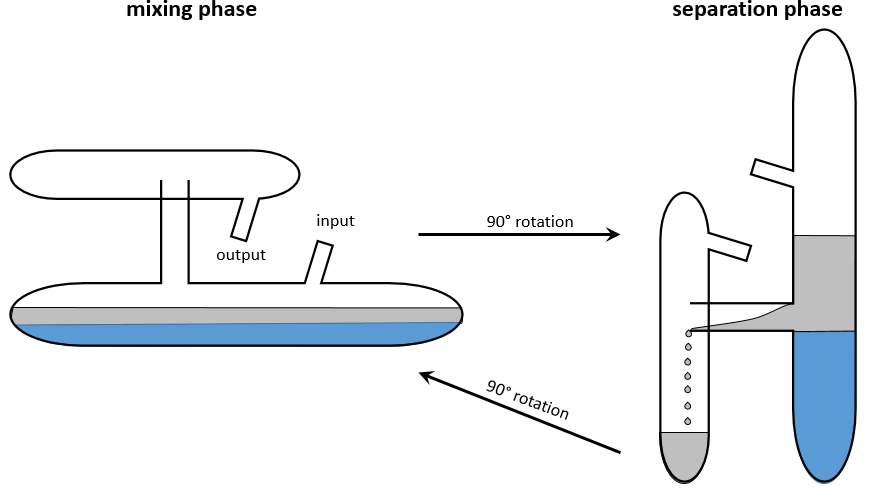 Initially, the sample is in the first tube (noted 0) and the bottom phase is already in all the tubes. 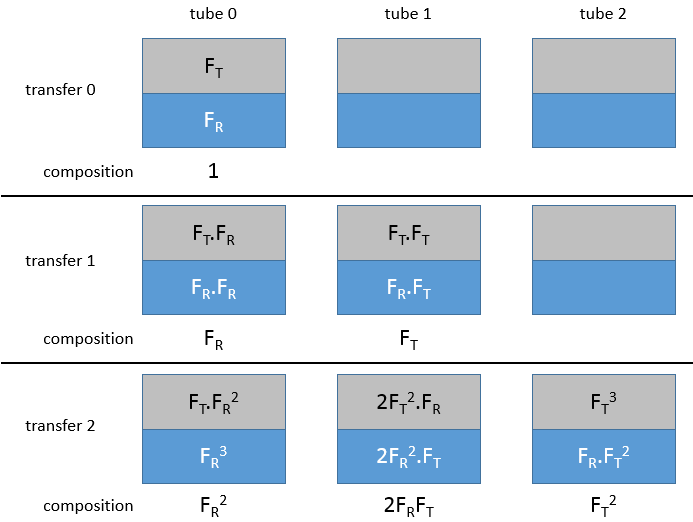 After three transfers, we would have FR3, 3FR2.FT, 3FR.FT2 and 3FR3. You may have noticed that those values are the members of an exponent of a sum:

n being the number of transfer. In a given tube r, the fraction is

We can thus predict the composition of each tube knowing the result of one single extraction. For a large number of extraction, we find the equation of a Gaussian curve.

The width of the peak is characterised by a standard deviation

The peak moves linearly with n, spread as √n and the intensity of the peak decreases as 1/√n. 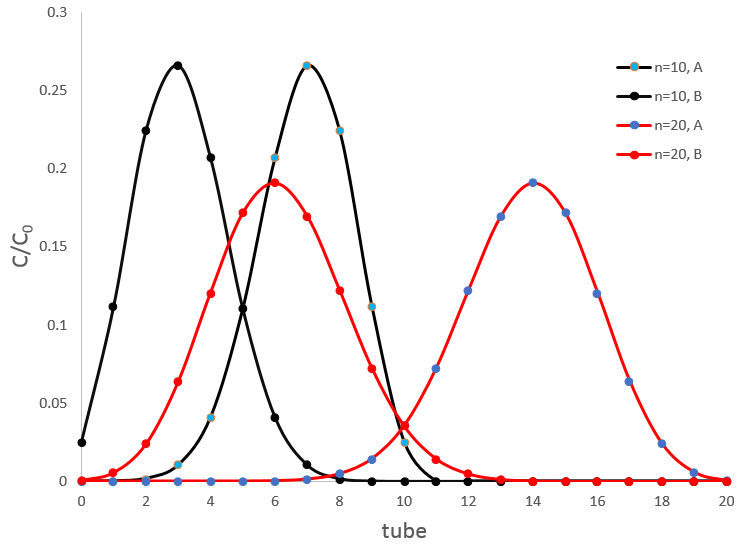 If two substrates are in the sample, the apparatus of Craig will separate them. Again, we have to choose carefully the conditions of the extraction to obtain a good separation. The figure above shows the concentrations of two species with DA=1/DB=9/4 after 10 and 20 transfers. There is an overlap between the curves where the species are not well separated but it decreases significantly with the number of extractions. At the maximum of the peak for A, after 10 transfers we find ~27% of the initial concentration of A but also 1% of the initial concentration of B. After 20 transfers, we have 19% of [A]0 and only 0.03% of [B]0.