Because of the particular geometries of some molecules, the CSCO may be different. Instead of the CSCO that we had with the atom, we want to determine the CSCOH: the complete set of operators commuting with Ĥ. It is thus a set larger than the CSCO because the operator don’t have to commute between them. The CSOCH can be subdivided into groups (SCO) of similar operators but they do not necessarily commute between each other. 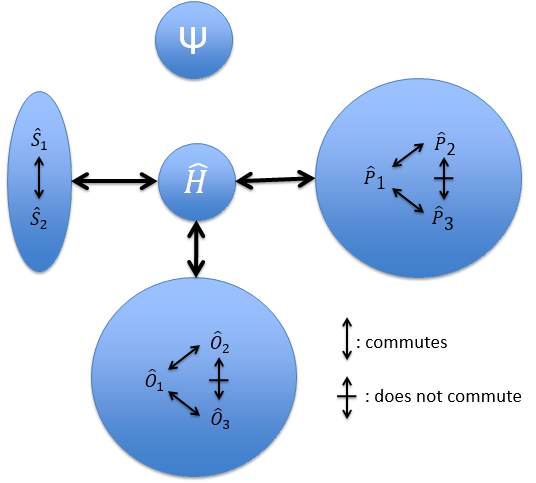 When two operators of the CSOCH don’t commute together, it implies a degeneration of the states.

In the case of atoms, when we have a spherical symmetry (it has been shown recently that some atoms are slightly deformed and have an elliptic shape (and then a quadrupole moment) or a pear shape (and then an octupole moment)), we have the usual CSCO. We can build 3 SCO: 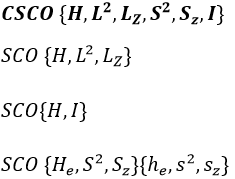 This last group is present for any system of electrons: the spin of the electrons is independent of the geometry of the molecule. The small letters correspond to operators of orbitals. In the case of a linear molecule, we lose the spherical symmetry but there is still a cylindrical symmetry. Instead of an infinity of axis of rotation passing by the nucleus, we have now only one axis of rotation on the axis of the two (or more) nuclei. This difference induces a modification of the SCO’s: we lost the L2 symmetry. As reminder, L2=Lx2 + Ly2 + Lz2. LZ is still in the SCO but Ly and Lx are not anymore commuting with H. We have now

In the case of nonlinear molecules, we also lose the operator LZ.

We have other symmetry operators that we have to add to the CSOCH (showed by the ? above):

The order h of a group of symmetry G is the amount of operations it contains. A group of symmetry can be continuous (order h of G is infinite, i.e. a symmetry of revolution) or finished (h is finite), commutative (or abelian) if a*b=b*a ∀ a and b ϵ G, or non-abelian (what leads to a degeneration).

We can thus search for the operators of symmetry of a molecule that let the Hamiltonian unchanged. It is the interactions electron-nucleus that impose this symmetry.

There are 5 operations of symmetry:

To apply several consecutive rotations we add an exponent x to Cn or Sn. It means that we apply the rotation 2π/n x times. x goes from 0 to n for Cn and up to 2n for Sn. The Some elements are equivalent. For instance C33=E 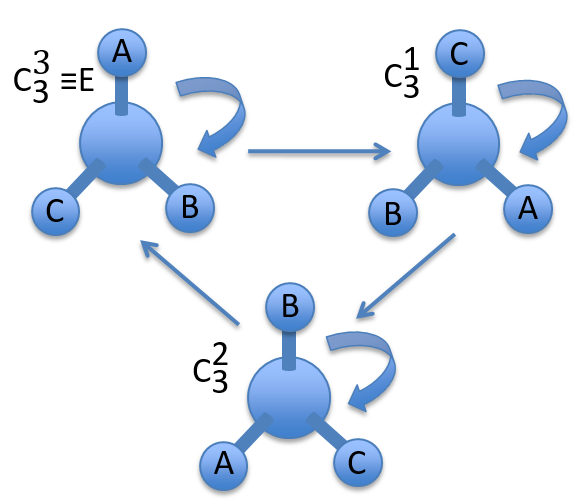 The groups are named following this picture: 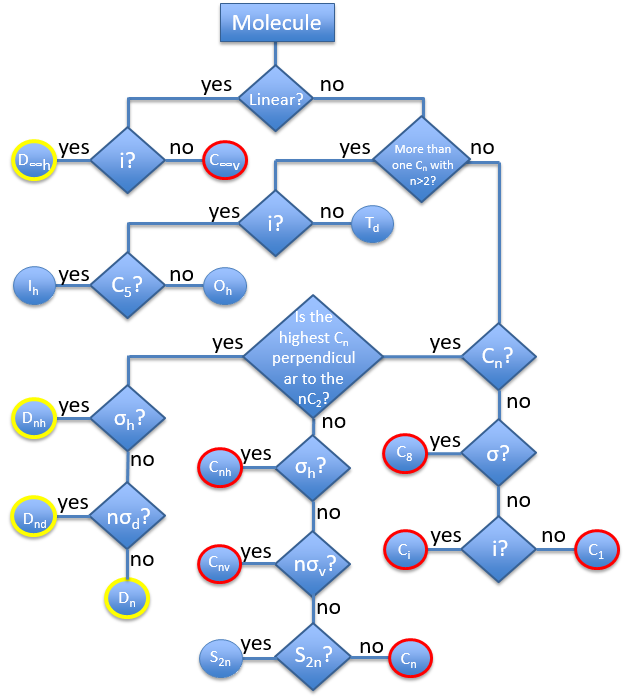 Now lets come back quickly on the properties of the groups.

Let’s take a look on how we build the representation of the group of symmetry C2V, i.e. the group of shouldered molecules as H2O, NO2 but also as CH2O. If we draw H20 in the Cartesian coordinates such as 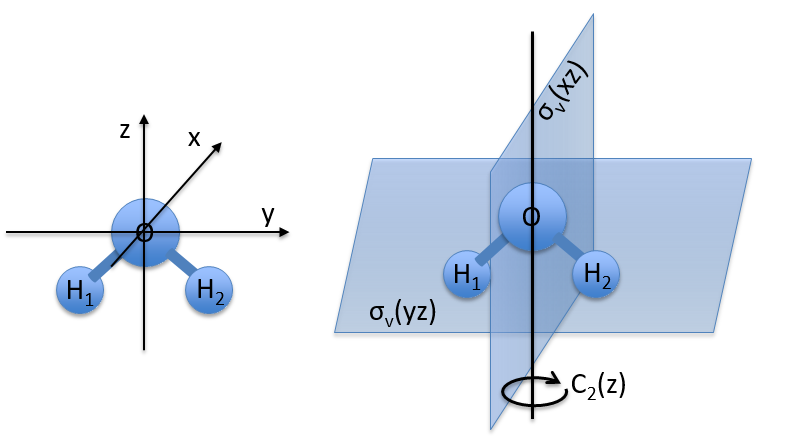 If we apply an operation of symmetry on the molecule, for instance σv(xz), i.e. the reflexion in the plane xz, the molecule did not change but if we follow one of the hydrogen atoms, its coordinate y changed of sign ((x,y,z)à(x,-y,z)). We can translate this into a matrix of dimension 3 that we apply on the coordinates x, y and z:

These matrices commute together and the group is intern and defined everywhere. For instance

Each column of the representation of the group is the value on the diagonal of the matrix for the corresponding base (here the coordinates x, y, z)

Those values are associated with the quantic numbers and the parity. 1 means symmetric and -1 antisymmetric. The character of one matrix associated to the operation a is the sum of the elements on its diagonal and is noted χ(a).

The coefficients can be determined from the characters of the matrices associated to the operations of this group because of the properties of orthogonality.

Applied to the C2v group, it gives

We will see next that there is in fact a fourth line (A2) in the table and why it is necessary to correctly describe molecule. 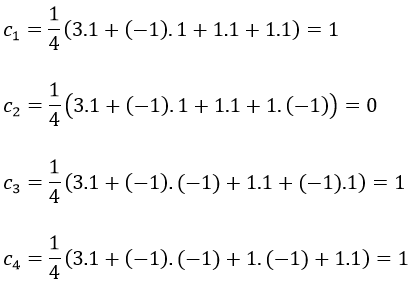 A group is normed if its order h, equal to the amount of operations, is also equal to the sum of the squares of χ ̅(a), and this for each irreducible representation, i.e.

For instance, we obtain for A1 and B2

The group C3v describes molecules such as NH3. It contains 6 operations: E, two C3 and three σv. We can represent it as

The irreducible representation E is degenerated: it contains a value different from -1,0 or 1. Yet the group is still normed (don’t forget there are two C3 and three σv):

The representations are orthogonal (for instance between A1 and E):

Application of the theory of groups

Each orbital of the atoms of one molecule is a basic function that impacts the geometry of the molecule. We need all of those functions to describe correctly and completely the molecule. As a result, a molecule such as NO2 is described by one representation of base 15 that can be reduced into 10 complete bases (5 of dimension 1 for the nitrogen and 5 of dimension 2 for the oxygen) because the two oxygen atoms are equivalent. 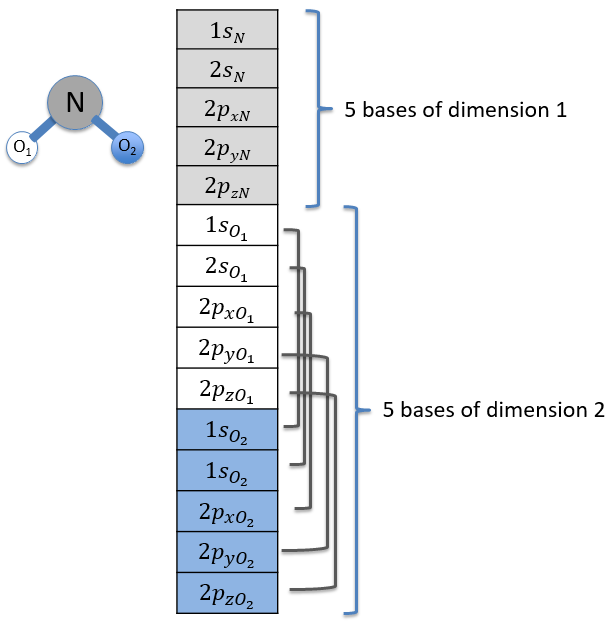 We have seen previously that the NO2 molecule belongs to the group of symmetry C2v. If one representations of N can be transformed by one operator of this group into itself in absolute value, it means that this representation is an irreducible representation of the group for the atom N. It is indeed the case for NO2:

We can thus find a matrix D(R) such as when it is applied to the base we find the linear combination that belongs to the group.To build a representation of the group C2v, we have to build one matrix of dimension n for each operation of symmetry of the group, i.e. 4 matrices. Those matrices define the transformation with regard to the four operations of symmetry of one base of n functions. The base has to be complete, i.e. the action of one operation on one of the functions of the base has to give a linear combination of functions of the base. In mathematical words,

The trace T(R) is the sum of the diagonal members of the matrix D(R) (here it is a+d). The set {T(R), T(R’),…} characterises the representation of the group D.

We can write the representations in a table

These three representations are not the only ones that apply to the NO2 molecule. We must also describe the orbitals of the atoms of oxygen to give a complete description of the molecule. In this case, it is a bit more complicated because the operations of symmetry can transform one oxygen into itself or into the other oxygen, in absolute value. As a result, the representation is not a series of numbers but a series of 2×2 matrices. If the orbitals remains unchanged by an operation, the matrix corresponding to this operation of symmetry is

If the atoms are interchanged, the matrix is

And we can do that for the other operations as well. That being done, the table of the group C2v is completed: 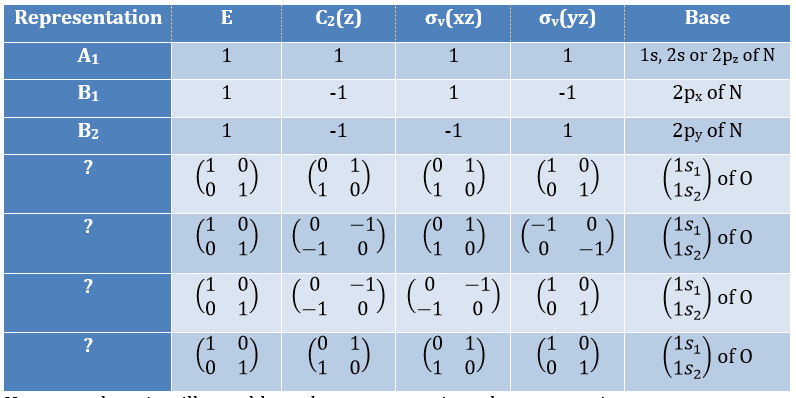 If you remember well, earlier in the course we discussed on the operators of symmetry of the water and we already talked about a fourth representation in the group C2v. Now you know why we needed this fourth representation. It is required to build the CSCO that would not be intern without A2.

To build the representation A1, we will thus need a linear combination of the 7 orbitals.

with i the corresponding representation, χ the trace of the operator and h the norm. For instance, applied to NO2,

To obtain π liaisons, the p orbitals have to be oriented correctly. On the other hand, antibonding liaisons are the result of p orbitals that are (also) correctly oriented but with opposed signs. We know that there are 3 unoccupied orbitals in NO2 (15 orbitals and 23 electrons). These orbitals are some of the antibonding orbitals and are the highest in energy. 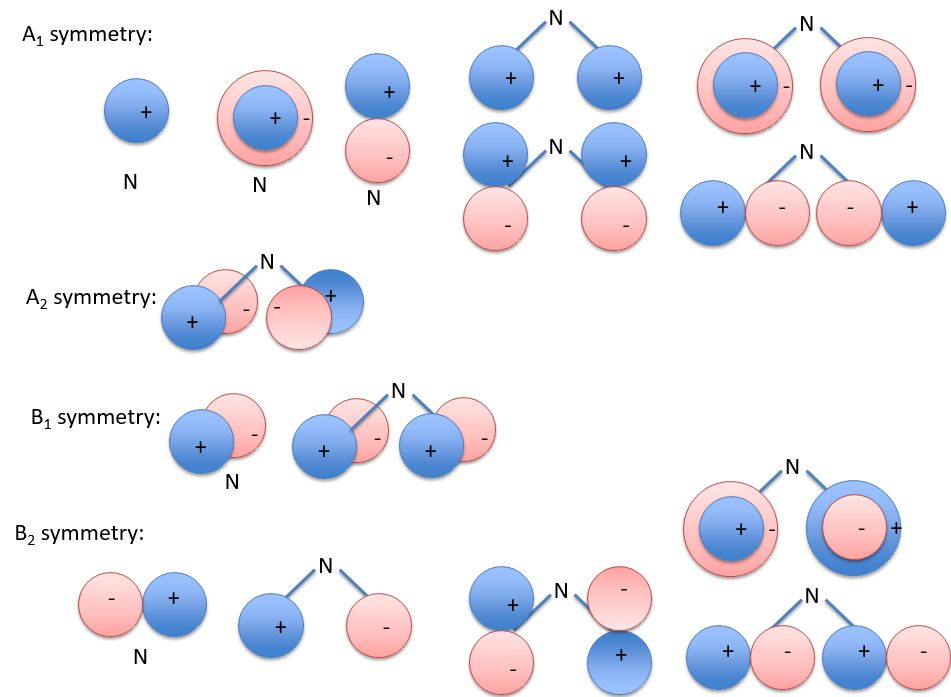 For degenerated representations, we can still do the projection using the diagonal elements of the matrix D(i). The formula changes a bit:

with ni the degree of degeneration.

NH3 belongs to the C3v group.

Obviously the presence of a 2 in the irreducible representation E indicates that this IR is degenerated. The orbitals to consider are 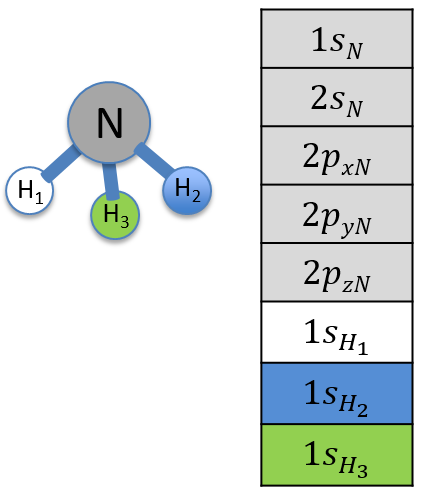 The orbitals s of N belong to A1 because they are spherical and the 2pz also does because it is on the axis of rotation. The rotations that we can apply on NH3 are of 120°, so our system of coordinates is not very convenient here. We can however obtain the matrix representation of {2px, 2py}

The matrix representation of {2px, 2py} is thus the irreducible representation E: the traces of the matrices correspond to the elements of the IR E in the table of C3v.

We repeat the process for the three hydrogen atoms

It doesn’t correspond to any IR of the table C3v but we can find a linear combination of them: 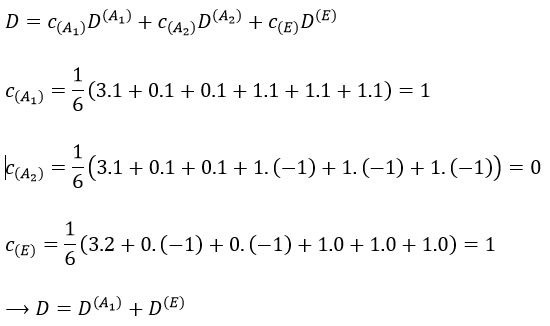 There are two projections for the operation E as it is degenerated twice. The atomic orbitals adapted to the C3 symmetry are, for the hydrogen atoms

We already verified the orthogonality of C3v previously

The proper functions of Ĥ (polyelectronic states) and of ĥ (molecular orbitals) that have a proper value E in common form a base for the irreducible representation of G.

Several proper functions have the same energy. As a result, the reduction leads to several representations amongst which some are not of dimension 1. 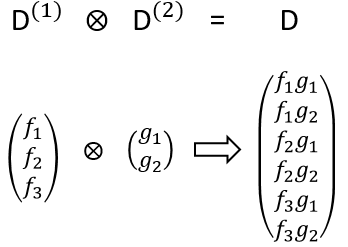 We can thus determine the symmetry of the product of several functions.

Most of the molecules have a fundamental state that is an A1 representation because the octet rule is respected. I understand that the direct product and its interest are vague for now but we will see them with the example of NH3.

NH3 belongs to the group of symmetry C3v.

This product corresponds to a linear combination of the IR of the group.

The coefficients can be determined from the relation

The molecular orbitals are called in function of their irreducible representation, written in small letters. The fundamental state of NH3 is 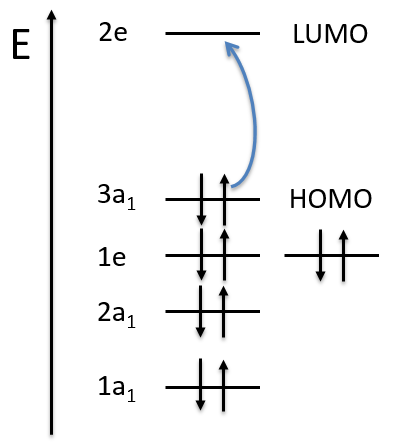 The MO 1a12 results from a coupling between two A1 states: A1xA1=A1. It is the same for the other a12 molecular orbitals. For the 1e4, we have the coupling of 4 E representations. The E representation is of dimension 2 and the coupling gives a degeneration of 16 (24). However, the principle of Pauli has to be respected as well, i.e. the only possibility is that the 4 electrons are distributed amongst the two orbitals of same energy with opposite spins. As the layer is full, the representation is A1.

If one electron of the HOMO (orbital 1e4) is excited to the orbital 2e (LUMO) we obtain two 2E states (1e3 and 2e1 give the same state by the symmetry hole/particle).

I don’t know the exact reason, but for those two cases the representations have specific names. For atoms, the representations have names identical to the atomic symmetry. The orbitals s belong to the group S (dim 1), the orbitals p belong to the group P (dim 3), etc. We can put an index to the group that translates the parity in this group. The index is g (gerade from German) if the state is symmetric and u (ungerade) if the state is antisymmetric.

If we apply the inversion operator on the nitrogen, we have 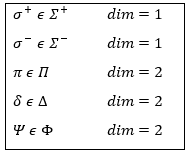 The distinction between σ+ and σ– is the direction of the rotation (clockwise or anticlockwise).

For centrosymmetric molecules, we note the distinction between ungerade and gerade