This process is coupled to the cellular respiration, involves O2 and is way more effective than the anaerobic oxidation. Instead of 2 ATP, the aerobic oxidation generates 38 ATP by glucose. It can also oxidise fatty acids and the carbonate parts of amino acids.

The cycle of Krebs: cycle of the citric acid

Szent Fuorgue studied the cellular respiration from an extract of muscle. He analysed the absorption of O2 in presence of various molecules. He observed that some of them considerably increase the absorption of oxygen by the tissues. It is the case for the succinate and the fumarate.

These molecule are stable to variations of temperature. The combustion of one succinate normally consumes 3 O2 but during the experiments they observed that the absorption of oxygen was above this value. They also showed that the absorption can be decreased if we add malate to the system. The malate is an inhibitor that affects the oxaloacetate, one catalyst of the cycle of Kerbs that is regenerated at each cycle except in presence of malate.

The cycle can be resumed by the following figure. 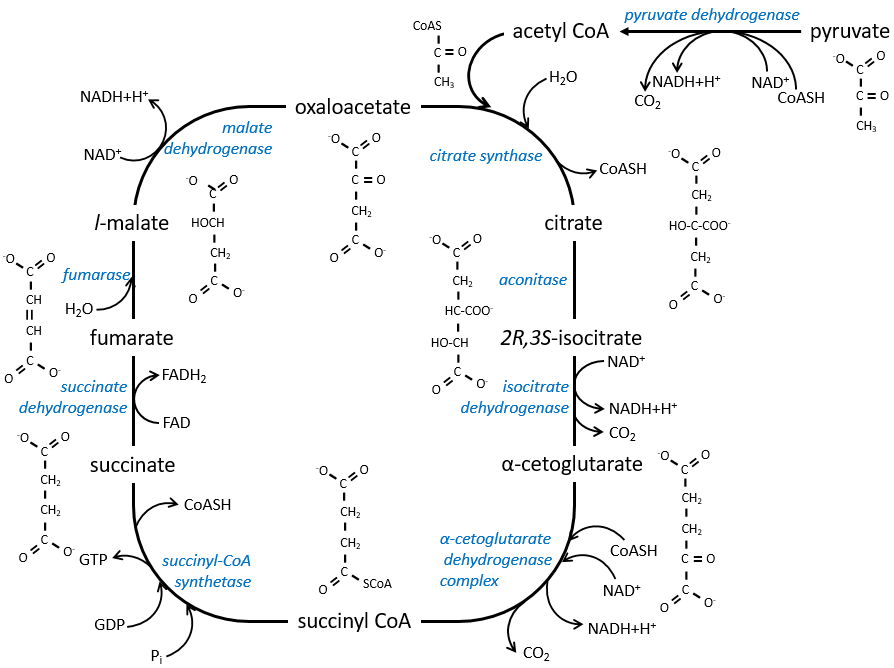 Citrate is the product of the first reaction of the cycle. Before explanations on the cycle, we will explain the formation of the acetyl CoA. It is made from pyruvate. The first step is the substitution of one CO2 by the CoASH through a thioester liaison.

The reaction is irreversible (release of CO2) and is catalysed by a big enzyme: the pyruvate dehydrogenase. Inside the enzyme we find the B1 vitamin. Simultaneously, there is an oxidation made by the NAD+. The product is the acetyl coenzyme A, or acetyl-coA.

The first step forms the citrate by the condensation between the acetyl-coA and the oxaloacetate. The reaction is helped by the citrate synthase that take a proton from the methyl group of the acetylCoA. It releases the coenzyme that can be used again.

The citrate is symmetrical but it is considered as prochiral by the enzyme of the next reaction. To pursue to cycle, the aconitase changes the conformation of the citrate to obtain the isocitrate.

The equilibrium is heavily in favour of the left but the right species is consumed by the next reactions so the reaction is displaced towards the right. Step 3 is subdivided into one reaction of oxidation and one decarboxylation.

The cleavage of the thioester liaison gives enough energy to form, not an ATP but a GTP.

The succinate is next oxidised to for the fumarate. The cofactor is the FAD: Flavin adenine dinucleotide, a derivate of the riboflavin (vitamin B2). 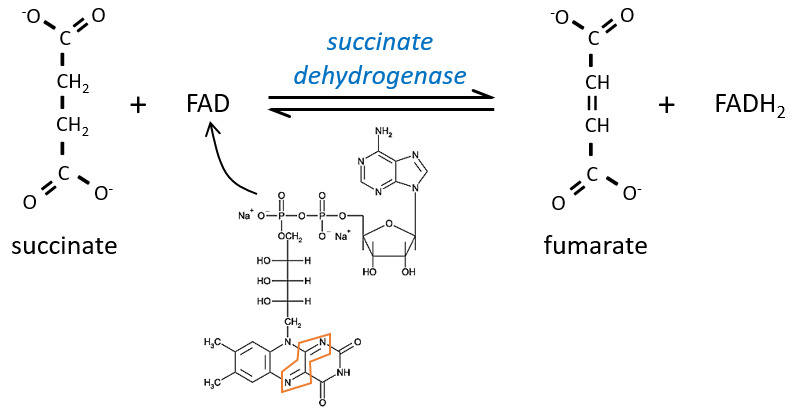 The reduction of the FAD is done at the orange area.

Step 7 needs one molecule of water to form the malate. Malate is a chiral molecule, the chirality given by the structure of the active site of the enzyme. As a result, only the l-malate is obtained.

Finally, the oxaloacetate is regenerated from the malate.

Now, you may say that there is none of the 38 ATP promised at the beginning of the section. Only one GTP was formed during the cycle but several CO2 were rejected and 3 NAD+ and one FAD were reduced. These molecules represent the energy of the ATP. Moreover, it is the process that occurs in aerobic cells but no O2 was ever involved in the cycle. We will see the source of the ATP in the next section: the respiratory chain.