The big difference between a solution and a gas is the presence of a solvent. A viscous solvent means that there are more collisions between the molecules of reactant and the molecules of solvent, slowing down the molecules. The first obligation to obtain a reaction is that the reactants have to be close to each other. In a still solution, the species move by diffusion (if the solution is mixed manually or mechanically, the main transport process is called convection but the diffusion still acts with a minor influence). Once the reactants are nearby, they are caged in the solvent and remains nearby for a given time

with DI the coefficient of diffusion of the species I. The reaction is the result of a vibrational movement. As for reactions of several steps, the global speed of a reaction will depend upon the slowest process. Diffusion can be the limiting factor.

There are thus two steps in the reaction. The limiting step is the diffusion if k-D<<kR and the reaction is the limiting step if kR<<k-D. We use the assumption of stationarity for the concentration of the complex, i.e. the products C are formed at the same speed that the reactants are consumed.

The concentration of the intermediate species is unknown but can be determined from the concentrations of the reactants if we know the constants of reaction.

We can now put this expression in the speed of reaction:

There are two limit cases:

At the beginning of the experiment, i.e. t=0, the reactants A and B are uniformly distributed in the solution. No reaction took place yet and the solution is homogeneous. A short time after t=0, some reactants have formed products and a gradient of concentration can exist locally. The flow of diffusion J is given by the law of Fick:

There is a flow of B towards A which is in the middle of a sphere or radius r. We integrate this expression from the smallest distance (dAB, i.e. the sum of the radii of A and B) to infinity. 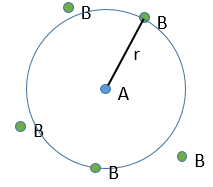 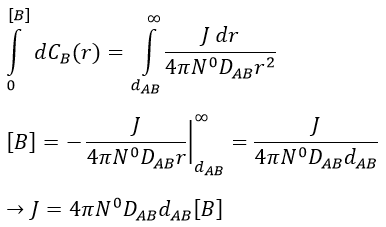 At the stationary state,

The equation of Stokes-Einstein connect the diffusion of a species with the viscosity of the solvent.

In viscous solvents, if kD has this order of value, then the reaction is limited by the diffusion. A correction has to be considered if the species are charged:

The theories we have seen before are valid for elementary reactions only and approximations have to be done to study more complex reactions.

In this case several reactions of the same order (m=1 or 2) involve the same reactant. 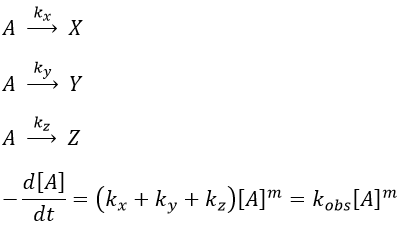 If there are two reactants, we put one of them in excess to obtain a pseudo order 1 reaction to determine the constant of reaction. 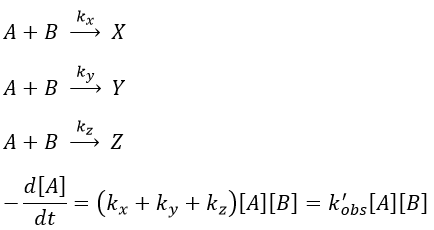 A chlorine atom can be added on tertiobutylbenzene on three different spots.

Knowing the global constant of reaction and the proportions of the three products, we can determine the constants of reaction of each reaction.

Luckily, mathematics give the solution for such an integral:

The relation is complex and the evolution of the concentration has to be studied through numerical programs. We can estimate the constants of speed with the method of initial speed.

If we plot V0/[A]0 vs [A]0, we find an approximated value of k1 at the intersection of the ordinate with the curve and of k2 from the slope of the curve.

example of reaction: behaviour of the cis-trans- cycloocta 1,5-diene 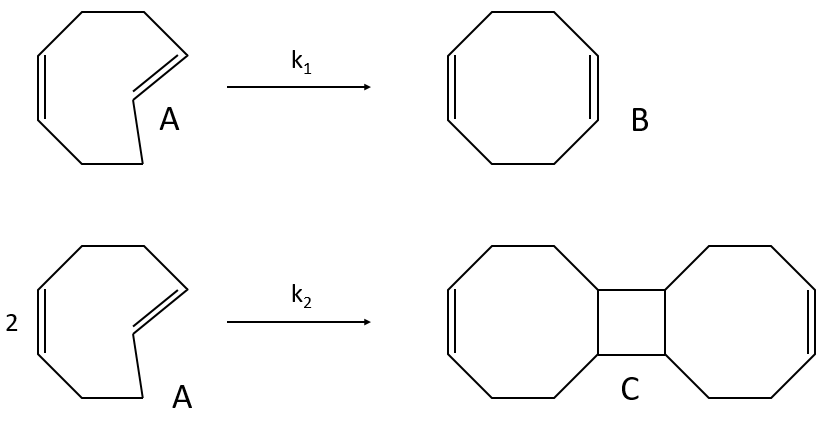 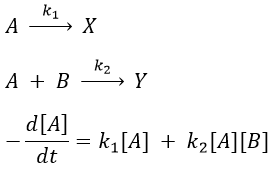 We can simplify the problem with an excess of B so the second reaction becomes a pseudo-order 1 reaction.

The constant of equilibrium K is the ratio of the concentration at the equilibrium of the products over the one of the reactants.

There is no notion of kinetics in this expression of the constant of equilibrium. But if we perturb the equilibrium, for instance by an abrupt modification of the temperature, the system has to adapt itself to the new conditions and the concentrations of the species varies.

When the system reach its new equilibrium, the concentrations and x do not vary anymore.

As a result, we obtain a new formulation of the constant of equilibrium of the reaction:

For a small perturbation of the equilibrium,

The transition between two equilibrium states is thus given by an exponential. If we plot the ln x versus the time, the slope of the curve gives the sum of the constants of speed k1+k-1. The characteristic time of relaxation tau to pass from one state of equilibrium at a temperature T to another one at T’ is

If we start from a solution with only one of the two enantiomers, there will be a spontaneous racemisation of the species in solution.

We can measure the variation of the angle of polarisation (optical activity α) of the solution over time.

α tends towards zero because the optical activities of the enantiomers cancel each other. We see an activity when there is a overpopulation of one of the species.

The concentrations of the three species can be followed.

B is formed by the first reaction and is consumed by the second one, there is thus two components to the evolution of its concentration, one being positive and one being negative.

It is a differential equation the solution of which is obtained by the sum of a general solution and of a particular expression. The solution is

At any time, the concentration of the final product C is

After an infinite time, A and B are not in solution anymore and only the product C remain in solution.

The concentration of the intermediate product is highly dependent of the speeds of both reactions and shows a maximum at t=tBmax. 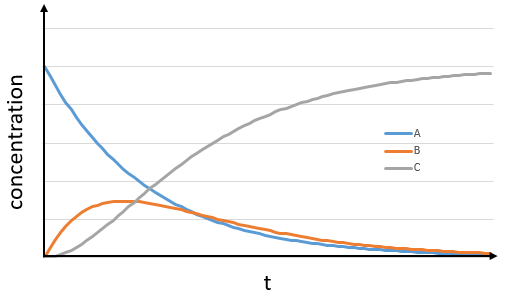 At t<tBmax, there is still plenty of reactant A that can form B. The concentration of B is not large enough to form quickly the final product C of the reaction. As a result, there is an accumulation of B. After tBmax, the rate of formation of B is smaller than its consumption.

If k2>>k1, then B is very reactive and does not accumulate. We can estimate that [B]t»0. If k2<<k1, then B is an intermediate with a long life time and that can accumulate up to a given concentration.

Approximation of the stationary state

The previous case was still quite simple and involved only reactions of order 1. In more complex cases, we use the theorem of the stationary state. The hypothesis is that the concentration of the intermediate product is constant, i.e. it is consumed as fast as it is formed.

In the previous case, we would have obtained

It gives us the concentration of B as a function of [A]:

The expression for the concentration of A is known so

This expression, curiously dependant of the time for a species the concentration of which is considered as constant, can be inserted in the expression of C.

We can integrate this expression to obtain an expression of the concentration of C as a function of the time.

A is thus consumed in k1 and C is formed in k1 too. It is coherent with the fact that B disappears as soon as it is formed.

This case seems harder to solve.

Depending on the constants of speeds, several cases can be sorted:

In a general way, 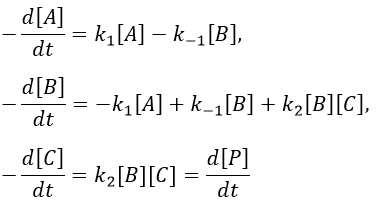 We make the assumption of a stationary state for B.

We still have two different concentrations that varies with the time in this expression ([A] and [C]). To obtain a solution, we need to find some limit conditions.

and the expression can be simplified

If C was put in large excess, then we can consider its concentration as a constant and we find a pseudo order 1 reaction (k’2=k2[C]).

We can find the value of k1 if we use several different concentrations of C. 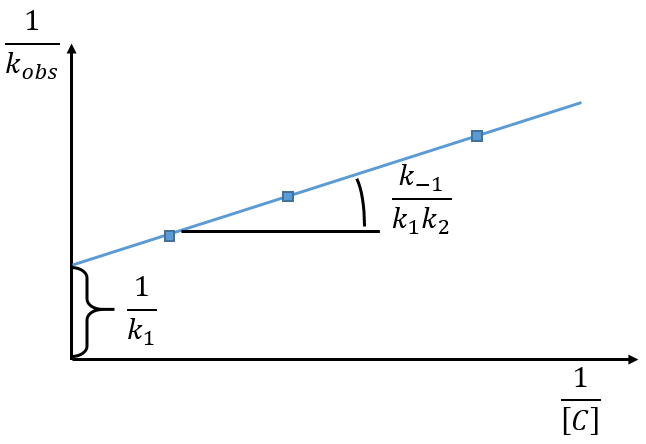 There are two limit cases:

B doesn’t turn back into A. The second step of the reaction doesn’t allow the first reaction to return to the equilibrium. As a result, both reactions can be considered as irreversible, what results in

In this case, the order of the reaction is 1 even if C is not put in a large excess. [C] can be mathematically removed from the equation. The experimental constant of speed is equal to k1. The first step is thus the limiting step of the reaction.

The equilibrium of the first step of the reaction has the time to be reached. It leads to a global reaction of order 2.

If C is in large excess, the reaction is of pseudo-order 1 as seen in the case 1, but if we put a very small concentration of Cl2 instead, then the expression for the speed changes:

Just by a modification of the experimental conditions, we can determine all of the constants of equilibrium of the enol-ketone tautomerism. 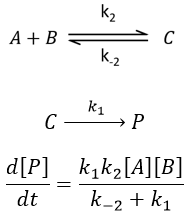 if k1>>k-2, then the first reaction has no time to return to the equilibrium and we can assume that the reactions are irreversible. The speed of the global reaction is limited by the first step of the reaction.

In the opposite case (k1<<k-2), we are still in the conditions of an apparent order 2 reaction but the constant of speed involves both reactions

Application: saponification of an ester

However this expression still corresponds to two possible mechanisms. To determine which one is correct, we use an isotope of the oxygen (O 18) in the carbonyl group. The presence of the marked oxygen in the molecule indicates the good mechanism: during the reaction, this oxygen is equivalent to the one of the OH– group if the attack takes place on the carbonyl. Some marked oxygens can thus leave the molecule or change of position.

If R’O– is a good leaving group or not, we have two cases.