Abstraction made of the time, the geometry is preponderant. In this section, we will discuss a lot about vectors and we define the tangent, the normal and the binormal.

The trajectory is the path a moving object follows through space. Let’s analyse this curve ζ from the geometric point of view. The trajectory curve can be defined by

If we take two consecutive positions,

, the average speed is the vector carried by the rope

The instantaneous speed on her side is a vector tangent to the trajectory.

In the Cartesian system, it corresponds to

In this last expression, the time is not explicitly present. If we defined ds as the instantaneous displacement

The length of the trajectory s is a parameter intrinsically related to the curve ζ as it doesn’t depend upon the choice of the origin point O, nor of the parameterisation of the curve ζ. It shows, in its infinitesimal version ds, the distance to make on the tangent of the trajectory.

Let’s derivate the speed vector, giving explicitly its norm V and the direction

The first term is proportional to

and is thus parallel to the speed vector. The second term is necessarily perpendicular to it. Indeed, the trajectory of

cannot be anywhere else than on a sphere because, by definition, its length does not change. As its derivative is tangent to this trajectory, it is thus tangent to the sphere and thus perpendicular to the radius of the sphere, i.e. to the vector

We can define the normal vector

as the derivative of the tangent vector.

λ is still to be determined.

is thus the sum of one tangent part

and one normal part

, perpendicular to the first part.

Given two consecutive positions of the point P on the trajectory ζ:

, and the direction of the speed

at the corresponding positions. The tangent unit vector

, by definition, doesn’t change its length. However, its direction changes: it turns by an angle 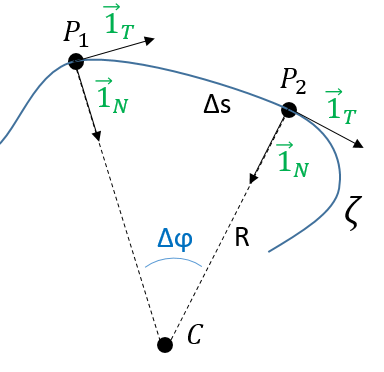 . With these three vectors, we can build an isosceles triangle and thus evaluate the length of 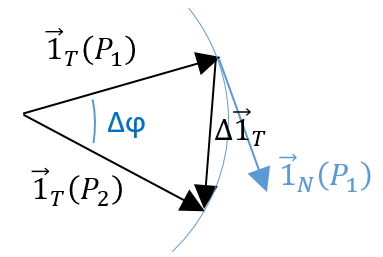 At the limit, when P2 tends towards P1, the length of

becomes perpendicular to . As a result we can write

λ corresponds thus to the angular speed of rotation of the tangent vector. To be more accurate, we see that if we extend the normal in P1 and in P2, they meet at the point C, and that this point C is, at the limit of

, the centrum of the tangent circle of the curve ζ in P1 and P2. The angle

equals the length of the arc ∆s divided by the radius R of the circle. As a result,

are defined, we can build a vector perpendicular to those two vectors: the binormal

. To do so, we make the vector product:

can be overimposed to the three Cartesian vectors

. Knowing the definitions of the speed and of the acceleration, we also can say that

The dot over a variable means that it is its derivative over the time. Two dots will mean the second derivative, etc. The readability of the equation can be eased this way. In terms of components of the speed and of the acceleration, we have

becomes, if we use the parameter s of length on the trajectory

What happens to the other vectors of the referential in the movement on the trajectory? As the vectors are orthonormal to each other, we can determine them from scalar products. 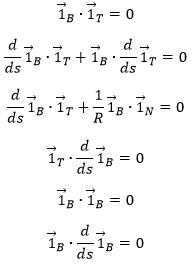 and to the tangent

at the same time. It is thus only proportional to the normal

. We define the torsion radius To by analogy with the curvature radius R:

Remember that to define the vector

we chose R positive; to define the vector

, we used the two vectors

. As a result, we don’t have the choice for the sign of To, that can be positive or negative.

can be easily calculated:

We can now write down the equations of Frenet:

We can use the fact that the vectors are the scalar product of each other. 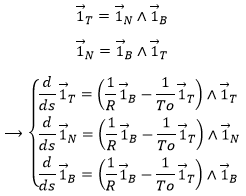 That was the result obtained previously. We also find that

The point P moves with a constant speed on a circle of radius ρ and of centre O. The angle the point travels by unit of time is thus constant. We define the angular speed ω as

If we choose the x-y plane to place the circle and O as the centre of the Cartesian system, the position of the point P is given by

The osculating plane is the one we chose, obviously.

The distance s made on the curve is given by the length of the arc ωρ. Indeed:

The torsion 1/To equals zero because the trajectory is in the plane z=0.

We can observe that

If we turn uniformly in the x-y plane while moving in the z direction with a constant speed, we obtain a movement of coiling around a cylinder. The time required to make one turn of the cylinder is the period τ and the distance made in the direction z over this time is the step H. The equation of the position of the point P is given by

At the exception of the movement on the z axis, this equation is thus the same than the one or the circle, given that ω=2π/τ. We can easily write the equations for the speed, acceleration and over-acceleration: 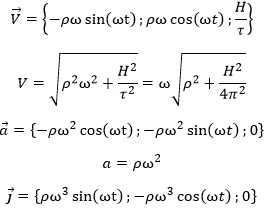 We note that some of the simple relations we had for the uniform circular motion are no longer valid:

. However, the acceleration is still perpendicular to the speed (

). The acceleration points towards the axis of the cylinder and is proportional to its radius ρ (which is different from the radius of the trajectory). Concerning the curvature radius R and the torsion radius To, we have 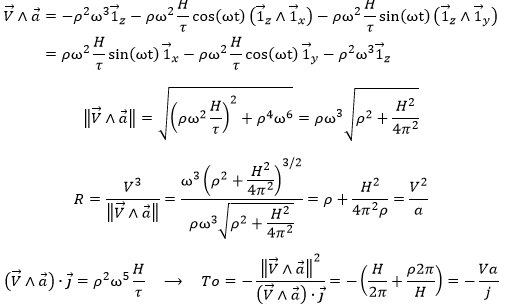 The torsion and the curvature are thus constant during the movement.

The Frenet vectors are given by

The length L of the helix is easy to calculate because the modulus of the speed is constant:

The following figure shows an example where the three Frenet vectors, the position of the centre of curvature C and a few circles of centre C and of radius R in the osculating plane P. 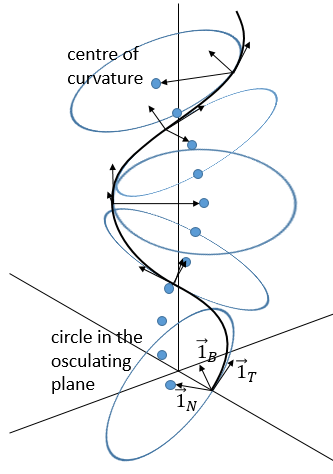