The limbic system is a group of gray matter and white matter structures lodged deep within the cerebrum that are involved in four functions: olfaction, emotional responses, behavioral activities and memories.

Habenula and septal area are connected via a structure called stria medullaris and are involved, particularly in reward pathway and emotional responses as well.

Connects hippocampus to hypothalamus (mammillary bodies) and the septal area. 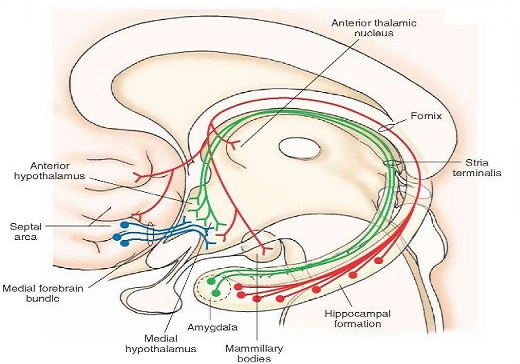 Striae terminalis: connects the amygdala to the hypothalamus and septal area.

Ventral amygdalofugal pathway : connects the amygdala to the hypothalamus and septal area and also to the mediodorsal nucleus of the thalamus 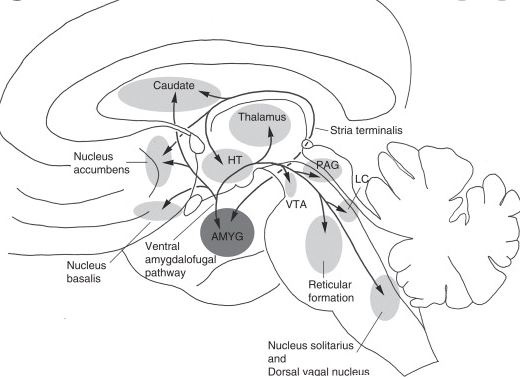 Mamillo-thalamic tract: connects mammillary bodies to the anterior nucleus of the thalamus.

Medial forebrain bundle:  two-way connection that connects the prefrontal cortex to the reticular formation in the brain stem running through the hypothalamus. 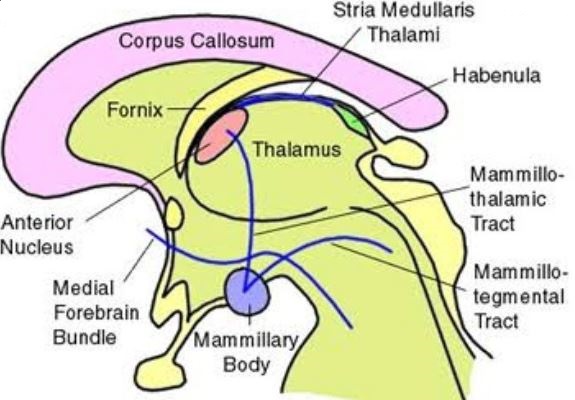 Mamillary peduncles: connects the ventral tegmental area to the hypothalamus

Hippocampus (dentate gyrus, which is the receiving portion and subiculum and hippocampus proper which are the leaving portion),

-Emotions: particularly the emotional responses, and it’s also involved in behaviors and there are three types of behaviors that the limbic system is involved in :

The Amygdala is the center (epicenter) for emotions and behaviors in the limbic system. How does it basically know that we are fearful, angry, or sad? In fact, the limbic system is in communication with our cerebral cortex.

Temporal lobe: is involved in multiple functions (smell, taste, visceral sensations, and other areas which are involved in auditory association areas and all are in communication with the amygdala)

The sexual behavior is also controlled by amygdala:

Depending your psychological situation amygdala feel if you are in sexual mood or not and if yes it will intervene by two nucleus the first one is paraventricular nucleus which releases oxytocin which is commonly secreted in females for uterine contraction and milk ejection, in males it is engaged in sexual orgasm and sexual drives itself. And the other one is Medial Preoptic nucleus which releases Gonadotropin releasing Hormone and GNRH releases in male testosterone which is also responsible for increased sex drive.

In fear induced (as emotion) the amygdala will connect via the stria terminalis and ventral amygdalofugal pathway with hypothalamus (posterior hypothalamic nucleus) and the posterior hypothalamic nucleus sends its descending axons downwards via what is called the hypothalamospinal tract and innervates the preganglionic neurons(sympathetic) located within the thoraco lumbar region of the spinal cord  and from there the sympathetic motor neurons will go to the target organs and the final result will be:

And the Paraventricular nucleus of hypothalamus which will secrete the cortico-tropine releasing hormone (CRH) which will stimulate the secretion of ACTH by pituitary gland, which in turn will activate the cortisol secretion in adrenal gland (cortisol is called the stress hormone)

Corticotropin-releasing hormone (CRH), a 41 amino acid neuropeptide, discovered in 1981 by Wiley Vale is likely involved in all three types of stress-response. Behavioral responses may involve CRH present in the cerebral cortex and amygdala. Autonomic responses are controlled in part by brainstem fibers descending from the locus coeruleus, which receives CRH-containing fibers from the amygdala and paraventricular nucleus. Hormonal responses center on activation of the hypothalamic–pituitary–adrenal (HPA) axis, which is initiated by CRH present in the paraventricular nucleus of the hypothalamus (PVH).