All organisms are made of cells

–          All cells are related by their descent from earlier cells

How do we study cells?

The quality of the image depends on 3 things

1)      Magnification : rates of object’s image size to its real size

2)      Resolution : basically it means the clarity of the image (the minimum size visible)

1)      Scanning electron microscopes focus a beam of electrons outs the surface of a specimen, providing images that look there dimensional.

Focus a beam of electrons through a specimen (TEMS), there kind of electron microscope is used to study the internal structure of cells.

The other technique is Biochemistry

–          Cell fractionation enables scientists to determine the functions of organs

–          Cell fractionation enables scientists to determine the functions of organelles

–          The structural and functional unit of every organism is one of two types of cells : prokaryotic or eukaryotic

–          Only organisms of the domains bacteria and arches

–          Cytoplasm in the region between the plasma membrane and nucleus

In the center of nucleus there is a concentrated region called the nucleolus and this is where ribosomal RNA is made and processed it’s also the site where there’s a lot of organization of other RNA protein complexes that have to be assembled in the nucleus.

And we see the endoplasm reticulum and outside of that is the Golgi and mitochondria and centrosome.

Centrosome is the region where doing cell division the chromosomal DNA comes together and we have also lysosomes, peroxisomes and in the outside of the cell we see microvilli protruding from the cell.

–          The nucleus contains most of the cell’s genes and is usually the most consequence…. organelle.

–          The nuclear envelope encloses the nucleus, separating it from the cytoplasm

–          The nuclear membrane is a double membrane each membrane consists of a lipid bilayer.

–          Pores regulate the entry and exit of molecules from the nucleus.

–          The shape of the nucleus is maintained by the nuclear lamina which is composed of protein.

–          Ribosome are particles made of ribosomal RNA and proteins.

The endomembrane system regulates protein traffic and performs metabolic functions in the cell.

The endomembrane system regulates protein traffic and performs metabolic function in the cell.

These components are either continuous or connected via transfer by vesicles.

–          The endoplasmic reticulum (ER) accounts for more than half of the total membrane in many eukaryotic cells.

–          The ER membrane is continuous with the nuclear envelope.

.) Modifies products of the ER

–          A  lysosome fuses with the food vacuole and digests the molecules.

–          Lysosomes also use enzymes to recycle the cell’ s over organelles and macromolecules a process called autophagy.

Mitochondria and chloroplasts change energy from one form to another.

–          Mitochondria are the sites of cellular respiration a metabolic process that generates ATP.

–          Chloroplasts, found in plants and algae are the sites of photosynthesis.

.) are not part of the endomembrane system

.) have a double membrane

.) have proteins made by free ribosomes.

.) contain their own DAN

–          Mitochondria are in nearly all eukaryotic cells

–          They have a smooth outer membrane and an inner membrane folded into cristae.

–          Chloroplasts contain the green pigment chlorophyll, as well as enzymes and other molecules that function in photosynthesis

–          Chloroplasts are found in leaves and there green organs of plants and in algae.

–          Peroxisomes are specialized metabolic compartments bonded by a single membrane

–          Peroxisomes produce hydrogen peroxide and convert it to water.

–          Oxygen is used to break down different types of molecules

The plasma membrane:Is the boundary that separates, the living cell, from its surrounding and exhibits selective permeability, allowing some substances to cross it more easily than others.

Cellular membranes are fluid mosaics of lipids and proteins

– Phospholipids are the most abundant lipid in the plasma membrane

-The fluid mosaic model states that a membrane is a fluid structure whith a “mosaic” of various proteins embedded in it.

– Freeze fracture is a specialized preparation technique that splits a membrane along the middle of the phosphatide bilayer.

The fluidity of membranes

– Phospholipids in the plasma membrane can move whithin the bilayer

– Most of the lipids and some proteins drift laterally.

– Rarely does a molecule flip-flop transversely across the membrane

Membrane proteins and their functions:

-Peripheral proteins are bound to  the surface of the membrane

-Integral proteins that span the membrane are called transmembrane proteins.

-The hydrophobic regions of an integral proteins consist of one or more stretches of nonpolar amino acids.

– Attachment to the cytoskeleton and extra cellular matrix

Synthesis and sidedness of membranes

– Membranes have a distinct inside and outside faces

-The asymmetrical distribution of proteins, lipids and associated carbohydrates in the plasma membrane is determined when the membrane is built by the ER and Golgi apparatus.

–  A cell must exchange materials with its surrounding, a process controlled by the plasma membrane

– Hydrophobic (nonpolar) molecules such as hydrocarbons, can  dissolve in the lipid bilayer and pass through the membrane rapidly

– Polar molecules such as sugars do not cross the membrane easily

Passive transport: diffusion across a membrane with no energy investment

1)Diffusion is the tendency for molecules to speed out evenly into the available space.

2)Although each molecule moves randomly, diffusion of a population of molecules may exhibit a net movement in one direction

3) At dynamic equilibrium, as many molecules cross one way as cross in the other direction.

Effects of osmosis on water balance

1) Osmosis is the diffusions of water across a selectively permeable membrane.

Water balance of cells without walls. Tonicity is the ability of a solution to cause a cell to gain or lose water.

Isotonic solution: solute concentration is the same as that inside the cell, no net water movement across the plasma membrane

Hypertonic solution: solute concentrations greater than that inside the cell; cell loses water

Hypotonic solution: solute concentration is less than that inside the cell; cell gains water.

Some transport proteins, called channel proteins have a hydrophilic channel that certain molecules or ions can use as a tunnel.

Aquaporin, to facilitate diffusion of water ,Ion channels that open or close in response to a stimulus (gated channels) 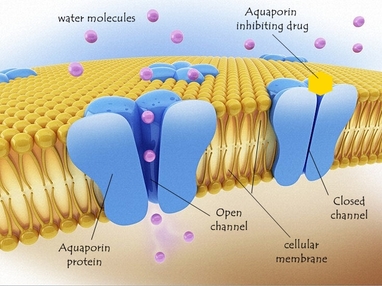 Bulk transport by exocytosis and endocytosis

Large molecules, such as polysaccharides and proteins, cross the membrane in bulk via vesicles.

In exocytosis transport vesicles migrate to the membrane, fuse with it and release their contents.

In endocytosis the cell takes in macromolecules by forming vesicles from the plasma membrane. 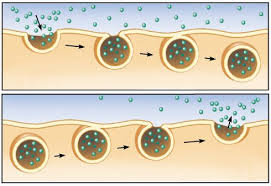 Cell division is incredibly tightly regulated (cancer  is described as an unregulated cell growth).In respect tothe cell division,there is a machinery that is a transitory state and this machinery is renewed every cell cycle.

Key components of this machinery are:

1)      Spindle: is made of microtubules or cytoskeleton, centrioles, kinetochores and contractile ring.

2)      And this machinery is controlled by a control system which integrates signals from growth and division.

of these 2 systems is controlled by a third system which is;

1)      Cell division requires partitioning of organelles for this there is 3 stratégies :

B)      Mitochondria chloroplast: these are ancient captured bacterias and conserves their own mechanism

of division .So chloroplast and mitochondria split during cell division .

together and reform Golgi and ER

D)     Centrosome = centriole is the poorly understood in eukaryotes cells.

role in mitotic spindle apparatus and centrioles are structures, that DNA contemplate his replication.

G1 and G0: G1 is the phase in  which the cell ask herself  “am I big enough to divide” are there enough food?

There are also the + or – factors from other cells or the environment.And if the final decision is not

to divide the cell goes back to  G0 phase where there is no division.

G2: another decision making phase is G2: cell verify if every single genome has been replicated or not. If it has not, there is a mechanism that ask the cell to halt in G2 until the last nucleotide could be replicated. G2 will be prolonged until the cell has all needed to go to M.Another control point is to see if each kinetochore archived bipolar spindle attachment.

There are critical landmarks on the chromosomes and the most important is the centromere. The centromere is the point at which the chromosome attaches to the spindle apparatus to allow chromosome segregation that is it’s only function; but at this point there is a very complete protein structure (fifty different proteins called connect cord. So, the connect cord is the structure that assembles at this point to archive protein segregation).

At the very end of chromosomes, there are specialized structures called telomerase.

Telomerase the enzyme which intervene in the replication of telomere.

Chromosomes have lots of genes collectively our chromosomes.

How 22250 genes which make proteins as well as RNA

Ploidy = number of sets of chromosomes

Haploid = organisms who have one set of chromosomes

Diploid = organisms who have two sets of chromosomes

Triploid = organism who have three sets of chromosomes

Tetraploid = organism who have four sets of chromosomes

Hexaploid = organism who have six sets of chromosomes

Octaploid = organism who have eight sets of chromosomes

The letter N is used to refer to number of chromosome haploid cell.

So, for humans and potatoes N=23 and as we are diploid, so we have 2 x 23 chromosomes

But in G2 the number of chromosomes dose not change.

We can do that because of amazing machine