The solutions immediately follow the problems. You can use this website to find fragments corresponding to a given m/z ratio:  MS fragments. The methodology to obtain the answer is given.

The two following spectra come from two isomers with the formula C10H14. Determine the structure of each of them. 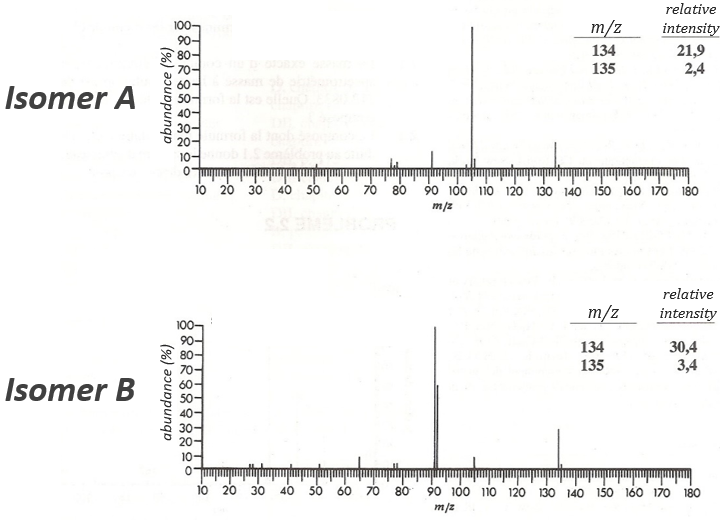 The composition of our unknown species is given in the wording: C10H14. The first thing to do is thus to determine the degree of unsaturation of the species.

In our case I=4, indicating a phenyl group somewhere in the molecule. It is confirmed by the presence of a peak at m/z=77 (benzene, often with a cluster at 78 and 79) and at 91 (tropylium) on both spectra. The peak of the tropylium at m/z=91 is way more intense for the isomer B than for the isomer A, indicating that the formation of ϕ-CH2+ is somehow less stable in the case of the isomer A. Indeed, the tropylium ion usually shows a very intense peak as we can see on the spectrum of the isomer A.

In our case I=4, indicating a phenyl group somewhere in the molecule. It is confirmed by the presence of a peak at m/z=77 (benzene, often with a cluster at 78 and 79) and at 91 (tropylium) on both spectra. The peak of the tropylium at m/z=91 is way more intense for the isomer B than for the isomer A, indicating that the formation of ϕ-CH2+ is somehow less stable in the case of the isomer A. Indeed, the tropylium ion usually shows a very intense peak as we can see on the spectrum of the isomer A. It is the main difference on which we will base our analysis.

Removing the phenyl from the composition, we find the composition of a butyl group (C4H9). The question is how those 4 carbons are placed around the phenyl but we have already limited by a lot the number of possibilities. We can assume that the 4 carbons make one chain bound to the phenyl and not 2 or more for the isomer B. Let’s focus on this isomer for now. There are 4 possibilities to bind a butane and a phenyl together:

From the intensity of the peak at m/z=91, we can reject the possibilities of the bottom. The two last possibilities, the n- and iso-butyl~ have very similar spectra and both can explain the peak at m/z=92. This peak comes from a rearrangement of Mc Lafferty transferring one proton from the carbon in γ of the phenyl.

We will favour the n-butyl~ because there is a peak of good intensity at m/z=105, i.e. +14 to the tropylium that is hard to explain (and almost inexistent) in the case of the iso-butyl~.

The isomer A can be the sec-butylbenzene that was on our list of 4 structures matching the binding of a butane with a benzene. The obtaining of a tropylium is hard in this case because there are multiple liaisons in α of the phenyl. Moreover, the fragmentation favours the removal of the most substituted fragments from the chain if there are several substituents. The phenyl can be removed (but aromatics are usually not removed from fragments) but also the ethyl chain, what leads to a peak at m/z=105, i.e. the main peak of our isomer A. We can also note the presence of a small (yet existing) peak at M-15. It means that there is a methyl substituent that can be removed. It is less probable than the removal of the ethyl but it can occur. It is thus a good call.

A second possibility is that there are two chains bound to the phenyl, one methyl and one propane. The methyl substituent would the displacement of the tropylium peak by Δm/z=+14 but that’s not how it works. The ion formed would not be as stable as the tropylium and the peak would not be that intense.

Determine the structure of the compound the spectrum of which is below.

The first thing we (always) do is to look at the parent peak. The mass (M=118) is even, what means that there is an even number of nitrogen in the molecule. More interesting, there is a peak at M+2. Its intensity is about 4.5%, meaning that there should be a sulphur atom in the molecule. If we remove the mass of an atom of sulphur (M=32) from the mass of the compound, we obtain 74, i.e. the mass of C6H14. The M+1 peak is approximatively 7% of the parent peak, in good agreement with the 6 carbons of our guess (1.1% by carbon à 6.6%). Just from the parent peak and the M+1 and M+2 peaks, we have found the composition of the compound. Now, there are a lot of possibilities to place a sulphur in an alkyl chain. So far we just now that there is no cycle in the molecule (otherwise we would have 2H less).

We will thus analyse the fragmentation peaks. The base peak is at m/z=43 and is surrounded by a cluster of intense peaks. The second most intense peak is at m/z=89, i.e. M-29. It corresponds to the loss of a -C2H5 fragment. The liaison between the sulphur and a carbon is usually not cleaved so we can assume that at one side of the sulphur, there is at least a chain of 3 carbons. This fragment is particularly well stabilised because of the possible cyclisation of the ion.

The presence of this intense peak limits a bit our range of possibilities from some substituted chains. In all honesty, it is difficult to explain the exclusion of all the species and why the dipropylsulfide is the correct answer but we will do our best.

The first compound we want to try out is the primary sulphide.

Several things may let us think it is the correct call:

Normally the cleavage in δε gives a peak a bit more intense than at m/z=75 because of the cyclisation of the ion but it is very intense in our spectrum. Moreover, primary sulphide give an intense peak at m/z=34, corresponding to SH2, which is not present at all on the spectrum.

The secondary and tertiary sulphides can be dismissed because of the very strong intensity of the m/z=89 peak. In general, they eliminate the biggest fragment and a very intense peak can thus be observed at M-15, M-29, M-43, etc. Note that we have a very intense peak at M-29. However a peak is usually observed at M-33 (loss of -SH) and there is no trace of it on our spectrum.

We can thus turn our mind towards the thioalkyls. A cleavage gives the very intense peak at M-29. If we assume that the intensity of the peak is similar than for the primary sulphide, we can guess that the m/z=89 peak corresponds to the cleavage of the αβ liaison. There is thus a side of the sulphur with a length of 3 or more carbons. For those thioalkyls, we find a peak at m/z=61which corresponds to the following fragmentation:

On the spectrum of thioalkyls, we can find peaks corresponding to the cleavage of the liaison S-C, for both the fragment containing the sulphur RS+ but also for the alkyl chain R’+. If the chain is long, the peaks of the alkyl chain can dominate. The base peak of the spectrum is at m/z=43, i.e. C3H7+. This very large intensity can be explained by the fact that the cleavage at both sides of the sulphur in the dipropylsulphide gives this ion. The RS+ peak should be characteristic at m/z=75 but the peak is only of average size. However, there is an important peak at m/z=76. It comes from a particular cleavage leading to the ion RSH+.