Operators can be applied to the wave functions and respect the equation of Schrödinger. The operator inversion Î is an operator such as, if a central symmetry can be found,

For instance, the orbital s have a centre of symmetry. We say that this state is even. If we apply the inversion operator to this orbital s, the sign of the orbital is still unchanged at the opposite side of the atom (i.e. obtained by central symmetry).

The orbital p is odd because if we look at one point in the positive part of the orbital and apply the symmetry, we are now in the negative lobe of the orbital. The d orbitals are even. If fact, we have

The operator Î can also be applied to electrons to obtain the opposite spin (up à down). 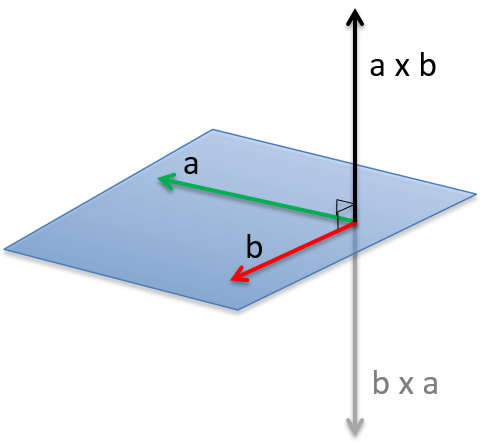 In quantum mechanics, p is an operator

Note that Lz does not depend on and there is thus a symmetry around the z axis for this operator. If we apply the operator Lz on the angular wave function, we obtain the wave function multiplied by ћm:

We can thus simultaneously determine the proper values of L2 (=ћ2l(l+1)), characteristic of the angular moment L, and of Lz (=ћm), the projection of L on the z axis, for fixed values of the quantic numbers.

The length of the vector L and of its projections on the axes.

For instance, for l=1, we can draw L and its projection as a function of m. The length of L doesn’t depend on m but the projection on the axis z does.

L2 and Lz commute: two operators that commute have the same wave function. The commutativity means that

Note that Lx and Ly also commute with L2, like Lz does, but their proper values <Lx> and <Ly> equal zero.

The same kind of properties is true for the spin of the electrons with the operators S2 and Sx, Sy, Sz.

To describe the whole system, we have thus a series of equations containing the 5 quantic numbers n, l, ml, s and ms. They form a CSCO (complete set of commuting observables). 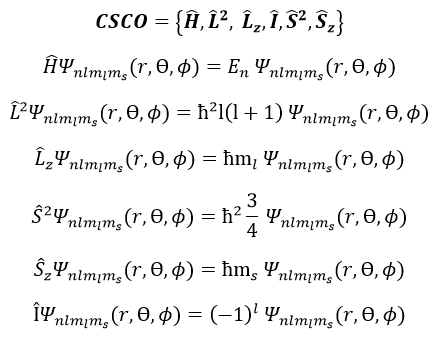 In an orthonormal base of functions {Ψ1, Ψ2,…ΨN}, the operator Â has a matrix representation (Â) which is a matrix composed of operators Âij such as

If Ψ1=Ψ2, the result would have been the proper value of Ψ1 if Ψ1 is a proper function of Â. It is usual to use the bra-ket notation of Dirac:

If Ψ1 is not a proper function of Â (ÂΨ≠aΨ), then we can find a linear combination (combili) of wave functions such as 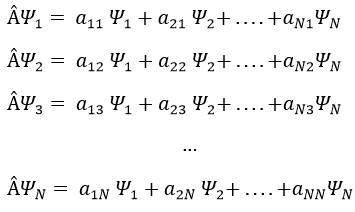 or written as matrices

Let’s take an example with the operators Lz and L2 and the angular functions Yml that we used before for l=1. The complete base of functions is Y1m={Y11, Y10, Y1-1}. The equations are

The values of aij can easily be found

This matrix is diagonal, i.e. the components of the matrix that are not on the diagonal are all equal to zero. (Lz) is also diagonal

It is a direct consequence of the Heisenberg’s uncertainty principle: we cannot know the exact position and speed of a particle at the same time. As a result, L2 cannot commute with all of the Lx, Ly and Lz.

We can define the operators of climbing L+ and of descent L– from Lx and Ly.

For our example with l=1, they are

Their role is to move from one orbital to another one.

As the last line shows it, it is impossible to move out of the system. There is no Y1-2 orbital.