The presence of a second electron induces a term of repulsion between electrons.

The repulsion is large in the 1s orbital wherein the electrons are close to each other (the radius being small). For instance, the energy of the orbital 1s2 of the Helium is at -2.9au (atomic units). If we calculate the energy without the repulsion term, i.e. as a monoelectronic atom (Ĥ= Ĥ1 + Ĥ2), we find -4au (E1=E2=-Z2/2n2=2au). Another consequence is that the orbitals s and p don’t have the same energy anymore. The configurations 1s12s1 has an energy of -2.17au and the configuration 1s12p1 an energy of -2.13au.

We can separate the Hamiltonian into one monoelectronic Hamiltonian term and the term of repulsion between the electrons.

ĥ(i) is the monoelectronic Hamiltonian of one electron.  We sum up the terms for all the electrons to obtain the Hamiltonian. To resume, the repulsion spreads the degenerated orbitals from the monoatomic model. 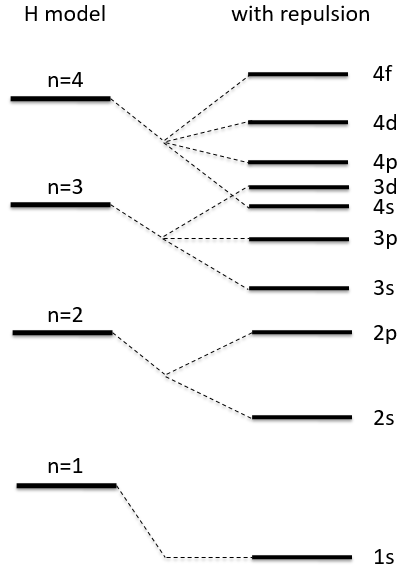 The repulsion can be large enough to have an orbital of level n+1 of lower energy than an orbital of n. It is the case for orbitals d and f and it is why we use the following technique to fill the orbitals with electrons: 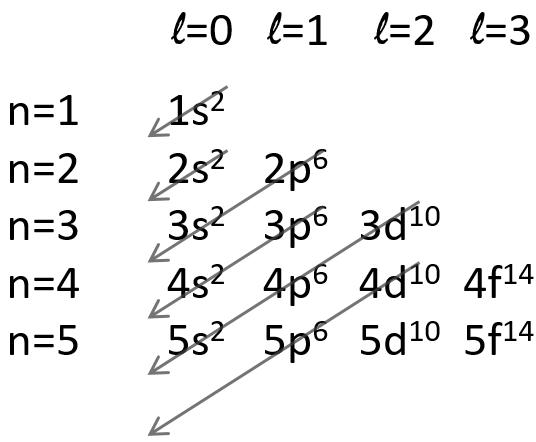 The 4s orbital is thus filled before the 3d orbital.

The operators that commute are simply the sum of the operators applied to the electrons independently (but perturbed by the repulsions). We write these operators with a lower case to denote them from the global operators (Ĥ→ĥ, Ŝ→ŝ, …).

The electrons are indistinguishable. It means that if we exchange an electron of an atom with another electron of the atom on the same orbital or on a different orbital, the atom remains unchanged. We can thus introduce a permutation operator Pij that commutes with the Hamiltonian Ĥ and the proper value of which is ±1. This last affirmation is true because we get back to the initial conditions if we apply the permutation operator Pij twice. The identity operator Ê is the operator with which nothing changes: ÊΨ=Ψ.

We don’t know which electron is in which spot (a, b or c). The wave function Ψ is one of the functions

To write the wave function we use the determinant of Slater which is a combination of the possible states.

The determinant of Slater has a few properties:

It can be translated by the law of Fermi: 2 electrons must differ by at least one quantic number.

Let’s apply this to the helium and a few of its excited states. He has 2 electrons that are distributed on the 1s orbital in its ground state. There can be two electrons on this orbitals if they have different spins (1/2 and -1/2). In the notation of Slater, the spin is indicated by the presence of a line above the orbital if the spin=-1/2.

For the excited state wherein one electrons jumped to the orbital 2s, there are 4 possible states depending on the spin of the electrons:

If instead the electron jumped to the 2p orbital, there are 12 possible states:

The resultant of two vectors is their sum. If we consider two operators Ĵ1 and Ĵ2 (which can be L and S), their resultant Ĵ = Ĵ1+ Ĵ2.

To know the resulting states of the coupling between the electrons, we take the largest S=s1+s2 and look for its Ms in the results of the coupling. It is Smax=1 with Ms=-1, 0 and 1. We discard these values of Ms from the 4 couplings that we obtained earlier. If there are one or more remaining Ms in the table, we do the same for S=Smax-1, etc. Here, there is one last Ms=0 that comes from S=0. The 4 couplings correspond thus to a singlet state (S=0 and Ms=0) and 1 triplet state (S=1 and Ms=1, 0 or -1). S goes from ∣s1+s2∣ to ∣s1-s2∣ by step of 1. The multiplicity is equal to 2S+1. The difference between the states is always by step of ΔS=1 and ΔMs=1. The states can be represented this way: 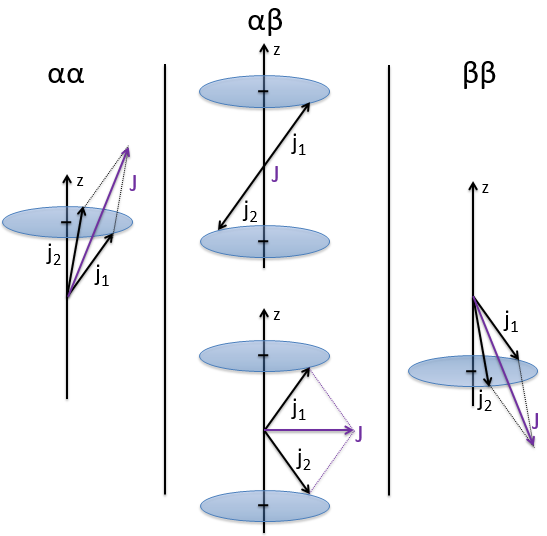 Note that the vectors for Ms=1 or Ms=-1 are not two times the length of the vectors for ms1 and ms2. The vertical component is. Note too that the resulting vector for Ms=0 may have a nonzero length (S=1). 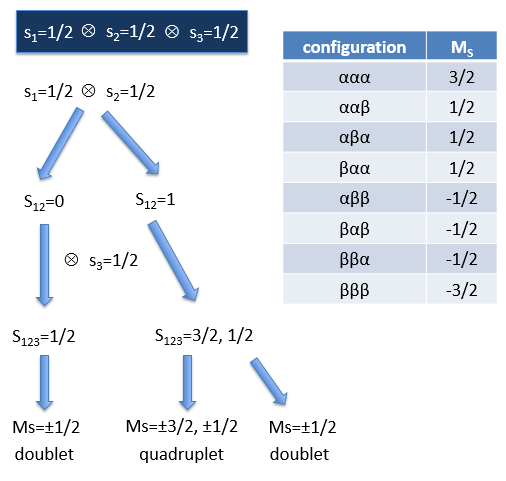 In the case of degenerated orbitals as the orbitals p or d, the amount of configurations is larger (see the part about the determinant of Slater) but the method is identical and is also applied to the quantic number l. Let’s take a few examples: the electronic configurations (1s)1(2s)1, (1s)1(2p)1 and (2p)1(3p)1.

The degeneration is 4: the two electron can have a positive or a negative spin (α or β). We have thus 2×2=4 degenerated configurations: 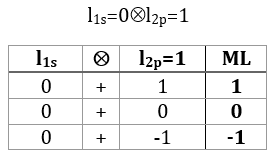 One can see that some electronic terms are obtained several times (2F for instance). Those terms are not identical and have not the same energy because they come from different couplings.

In the case of equivalent electrons, the amount of states is more limited. For instance we had 36 possibilities for the 2p3p configuration. This amount drops to 15 for the 2p2 configuration. This amount is equal to X!/(X-N)!N! where X is the degeneration of the state and N the number of electrons. In our case, 2p2, N=2 and X=6 for the orbital 2p: there are 3 orbitals (2p+, 2p0 and 2p–) and 2 spins. There are thus 6.5/2=15 possibilities. To determine the electronic terms of this coupling, we will make a list of the 15 possibilities and identify each one by the couple (ML,MS). To do so we draw a table with a column for each one of the 6 states and we put pairs of electrons together. In a seventh column, we write down the (ML, MS) of the couple of electrons. 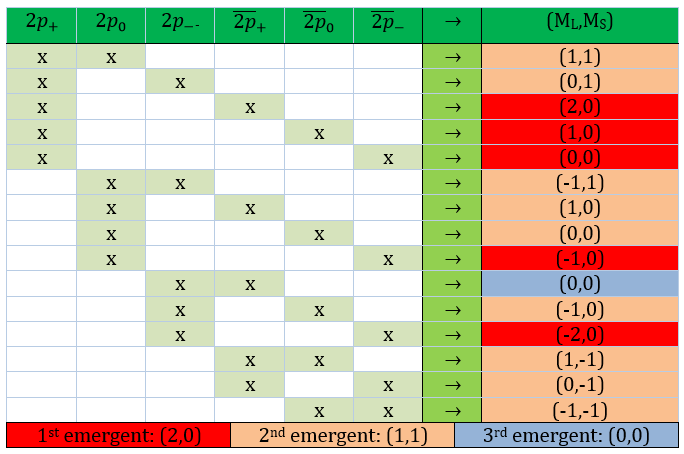 The magnetic moment induced by the spin of the electron interacts with the magnetic field induced by the electric current resulting from its orbital movement. This relativist effect induces a further separation of the states and an additional term in the Hamiltonian.

The relativist effects grow with the atomic number of the atom: the larger the atomic number, the heavier the nucleus. Its charge increases as well meaning that the electrons have to revolve faster to compensate.

Energy of the states

From that, we can write

The energy is thus the average value of Ĥ. To determine it, we start from a linear combination of determinants of Slater (ML,MS). An emergent determinant of Slater always gives a proper function. From this point, we can apply operators L+, L–, Ŝ+ or Ŝ– to increase/decrease the value of ML or MS and find their energy.

We do it for each state that has at least an emergent. If there is no emergent, we can apply the rules of orthogonality: 2 wave functions that differ by at least one proper value of operators that commute together are orthogonal. Eventually, the proper functions are normalised.

With this method, the energies of the states can be found. One simple example says more than a thousand words. The coupling of two electrons gives a singlet (S=0, MS=0) and a triplet (S=1, MS=1, 0, -1). We will place the values of MS in boxes for S=1 and S=0, as shown below. 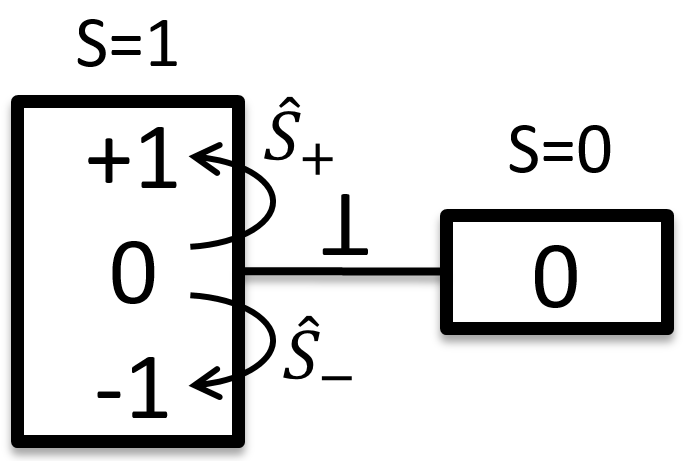 To obtain the wave function of the state MS=0, we apply the operator of descent Ŝ– on Ψ1,1 (we could have applied Ŝ+ on Ψ1,-1 instead).

One electron in the α state is thus now in the β state. We need to norm the function. To do so, we must have the norm N equal to

Applied here, we have

The orbitals are orthonormal, meaning that the integrals equal 1 if the two terms of the integrant are identical and zero if they are different: ∫αα=1, ∫ββ=1, ∫αβ=0, ∫βα=0. The cross terms of the square (in blue) are thus equal to zero and the others equal 1.

Meaning that, once normed,

The same method can be applied on more complex cases. For instance with two 2p electrons: