Its goal is to supply energy to the cell wherever it is needed. The glycolysis forms pyruvate from the glucose that can next be deteriorated anaerobically to form lactate or ethanol through fermentation. In 1870, Louis Pasteur discovered the functioning of yeasts. He isolated one yeast and added it to a wine that was not fermenting. The wine fermented. At this time, Pasteur believed in the vitalism so he did not search further. Later, the Buckner brothers were preparing extracts of yeast. As it was not easy to conserve, they put the extracts into sugar and it fermented. The yeast has thus not to be complete (or alive) to be effective. The extracts were composed of two molecules: one large enzyme that becomes ineffective when the temperature increases and one small molecule that was ineffective alone. In fact, the small molecule is a coenzyme of the big enzyme and the fermentation is only possible when both molecules are together. The complete process of the fermentation of the glucose was discovered in 1925 by Embdem and Meyerhof. 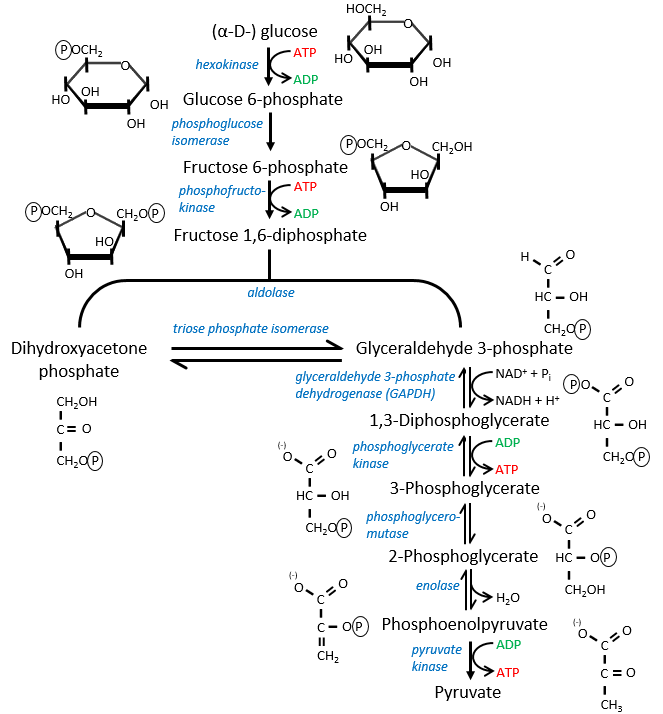 The first step is the phosphorylation of the glucose. The phosphate is added on 6’. For this reaction, as for the others of the glycolysis, an enzyme (the hexokinase/glucokinase) to form the ester and to cleave the anhydride of the ATP.

The second reaction involves the transformation of a pyranose into a furanose.

The third step is dependant of the needs of the cell in energy.

When the cell absolutely needs energy, its consume ADP and forms AMP. If the concentration of AMP in the cell increases then a signal is sent to the phosphofructokinase to increase the rate of the reaction. On the contrary, if the cell is full of ATP, then there is no need to make more of them and the reaction is slowed.

In the next step, the fructose is cleaved into two chains of 3 carbons, an aldose and a ketone that can be transformed into each other by the triose phosphate isomerase.

Because the reaction 5 is reversible, if the C1 of the glyceraldehyde was marked, we would find the fructose marked on 3’ or in 4’.

The next steps involve chains of 3 carbons. From one glucose, they are thus occurring twice.

The enzyme of the step 6 is the GAPDH (glyceraldehyde 3-phosphate dehydrogenase) and the NAD (nicotinamide adenine dinucleotide) is its cofactor and has to be in the active site of the enzyme for it to work. NAD+ is its oxidised form and NADH+H+ its reduced form.

The presence of the reduced form can be confirmed by a new peak of absorbance at 340nm. The reduction generates some energy to allow the formation of a phosphoanhydride, what is a liaison high in energy. It will thus generate a lot of energy when it is cleaved.

The seventh step uses the energy of this liaison to regenerate one ATP.

The eighth reaction displaces one phosphate. It is done by an enzyme called mutase.

The ninth step is an intramolecular reaction of oxidation. C2 is oxidised while C3 is reduced. We have now a phosphoenol the cleavage of which restores one ATP in the following reaction of tautomerization.

In total, two ATP were used during the glycolysis to form the trioses. These steps are thus using the reserve of energy of the cell. However two reactions form one ATP by triose. As there are two trioses by glucose and the isomerase can turn the ketone into the glyceraldehyde, so we form 4 ATP from the trioses. During the complete glycolysis, 2 ATP are thus formed that can be used by the cell. For anaerobic cells, it is the only way to produce ATP.

The NAD+ has to be regenerated by fermentation.

The pyruvate, the final product of the glycolysis, is used to oxidise the NADH+H+ and form lactate that is next released in the middle.

Also called alcoholic fermentation, this process also uses the pyruvate but is made in two steps. One first that involves the rejection of CO2 and the second that oxidises the NADH+H+ and frees some ethanol. 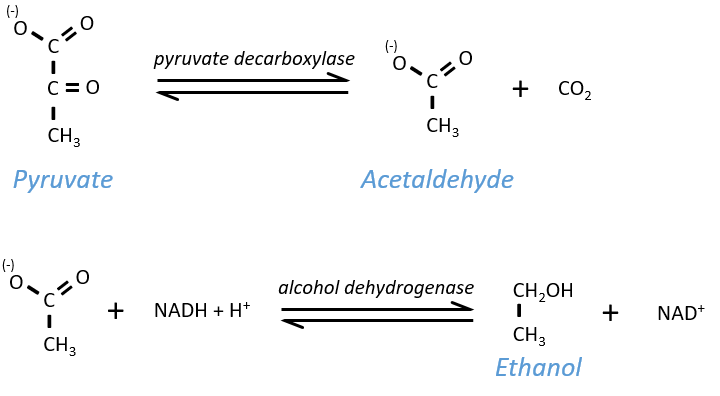 Comments on the glycolysis

The reaction is in equilibrium and is only made in case of need. If the triose was essentially used to do this, the whole process of the glycolysis would be pointless: it would consume 2 ATP to form 2 ATP.

Some steps of the glycolysis have a positive ∆G0’. It is the case of the steps that form rich liaisons. In this way, the step 6 is coupled to the step 7 that cleaves the rich liaison to form an ATP.

If we consider the two reactions at once, i.e. a reaction of oxidation of the aldehyde into a carboxylic acid, we find a ∆G0’=-10kcal (7.3kcal are equivalent to one ATP). The two-steps reaction is favoured because we can store the energy as ATP.

The two first steps cost energy but the third is very favourable. In total, we have a ∆G0’=-6kcal/mol and the formation of an ATP.

There are some molecules that can block the formation of the ATP. It is for instance the case of the arsenate ion which is a poison for us. In the step 6 and 7, the ion takes the place of an inorganic phosphate.

We still obtain the product of the step 7 but without the formation of ATP.

The combustion of one glucose is an exothermic reaction:

The combustion of the products of the glycolysis (two pyruvates) gives

It is still a very small quantity of energy that was recovered from the glucose. This method was used when there was almost no oxygen available and is used in anaerobic environments.