Some solids are conducting the electricity and some are not. We will explain here from where the conductivity comes and the difference between a conductor and an insulator. The conductivity is explained by the band theory.

We have seen in the section on molecular orbitals that liaisons are the combination of the atomic orbitals of the bound atoms.

The width of the band increases with the number of atoms but the difference of energy between the molecular orbitals decreases significantly and in metals, the atoms are all bound together, leading to a continuum of molecular orbitals, a band.

The energy required to an electron to jump from a lower orbital to a higher one is thus small inside the bands and a simple thermic agitation may be enough.

The bands can extend on a wide range of energy but there can be some space between two bands of molecular orbitals. The ranges of energy not covered by any band are called band gaps. In some cases, there is no gap between two bands: the bands overlap.

The Fermi–Dirac distribution f(ϵ) gives the probability that (at thermodynamic equilibrium) an electron occupies a state having an energy ϵ.

If there is a state at the Fermi level (ϵ = µ), then this state will have a 50% chance of being occupied at any given time. It is in the vicinity of the Fermi level that we find the LUMO and HOMO orbitals. The conductivity of a solid will depend on the ability of electrons to pass from a HOMO to a LUMO orbital. In a metal, the Fermi level is in a band and it is thus very easy for electrons to jump from the HOMO to an unoccupied orbital. Also remember that in metals, some electrons are not bound to atoms but are shared and can move inside the solid. For those reasons, metals conduct well electricity. 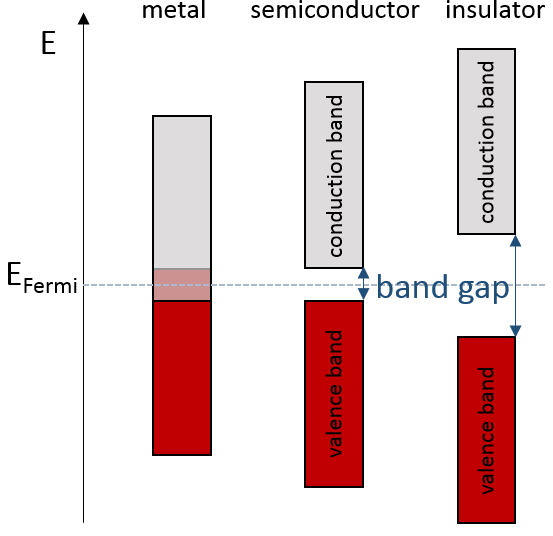 Considering this, an increase of the temperature leads to a better conductivity. However, it is not always true. Superconductors are particular materials the resistance of which drops to zero when they are cooled below a critical temperature, that can vary depending on the material of the superconductors. It is a quantum mechanical phenomenon characterized by the Meissner effect: when a superconductor is placed in a weak external field and cooled below the critical temperature, the magnetic field can no more penetrate the material (in fact, it does but only on a very small distance). In the superconductors, the electrons are bound by pairs, called the Cooper pairs. Despite the repulsion that we may expect between two electrons, an attraction can exist at very low temperatures due to the electron-phonon interaction. A phonon is a mode of vibration of the atoms of the lattice. The vibration has a given frequency and thus an energy (E=hν). The electrons of a Cooper pair are not necessary close together because this is a long range interaction. This interaction is very small but when we consider many pairs of electrons, the pairing opens a gap in the allowed energy states of the electrons. This gap prevents small excitations of the electrons, what leads to the zero electrical resistance and to the superconductivity.

Superconductors are also the most powerful electromagnets know. Those are used in several applications. One of them is the fastest train on earth, the Maglev, that uses superconductor magnets to levitate several centimetres above the rails.

When we are cooking, the handle of pans are insulated so that we can grab them without burning our hands. The pan itself has to be a good conductor of heat.

The arrangement in a crystal is rarely perfect. In fact, except at 0K, solids have flaws in their arrangement. It is a result of the second law of thermodynamics (next chapter) that says that the disorder of the universe has to increase during any process. A flaw in a crystal increases the disorder in the crystal: there is only one way to draw one perfect arrangement of atoms but there are many possibilities to place a flaw in this arrangement.

As a result, the single perfect crystal is at the absolute zero. For larger temperatures, the crystal has some energy from the heat that is turned into potential energy through flaws. 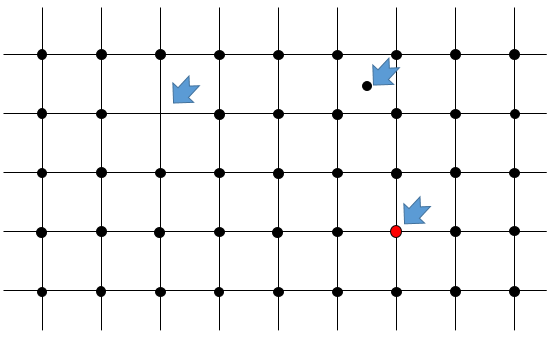 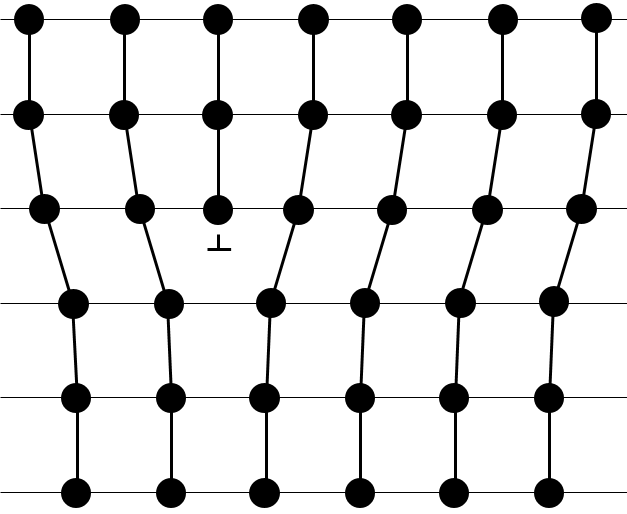 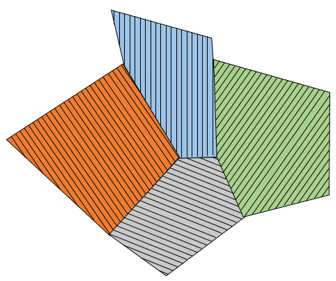 An alloy is a solid composed of several elements and having the properties of a metal. Different types of alloys exist:

Mixt alloy: it is a combination of the interstitial alloy and of the alloy of substitution.

The properties of the alloys depend on the elements composing the alloy and can drastically change from the properties of the main metal. A metal like the aluminium that is flexible can become hard if we mix manganese with it. However, this mix makes the solid very sensible to water.

Semi-conductors can be doped by the intentional addition of impurities in their structure. The impurities have the effect of adding or removing electrons from the lattice. In the case of additional electrons, those are destined to fill the band gap between the valence and the conduction bands. Removed electrons come from the valence band so that the gap is displaced.

Elements of the column IIIa can also replace atoms of Si in the lattice. In this case, the lattice loses one electron by replaced atom. The inserted atom, Al for instance, has an electron less than the other atoms. It creates a “positive hole” in the lattice. A doping where electrons are removed from the lattice is called of type p (p for positive), or p-type. We also say that Si uses Al as a captor (of electron).

The semi-conductors or the other columns can also be doped the same way by elements of a lower or higher column.

A p–n junction diode is made of a crystal of semiconductor, Impurities are added to it to create, on one side a region that contains electrons, forming a n-type semiconductor, and on the other side a region that contains holes, forming a p-type semiconductor. The boundary between these two regions, called a p–n junction, is where the action of the diode takes place. When those two materials are attached together, a flow of electrons occurs from n to p side. As the electrons flow there is now a region where no charge carriers (electrons and holes in this case) are present. This region is called the depletion region. The crystal allows electrons to flow from the n-type side (called the cathode) to the p-type side (called the anode), but not in the opposite direction.