In the previous section, we discussed the possible reaction on the carbonyl group of organic molecules. The carbon is an electrophile and the oxygen is a nucleophile. Yet, the presence of a carbonyl can imply other processes. The hydrogen’s that are on a carbon neighbour of a carbonyl group, i.e. the carbon in α of carbonyl, are acid and strong bases can snatch it. 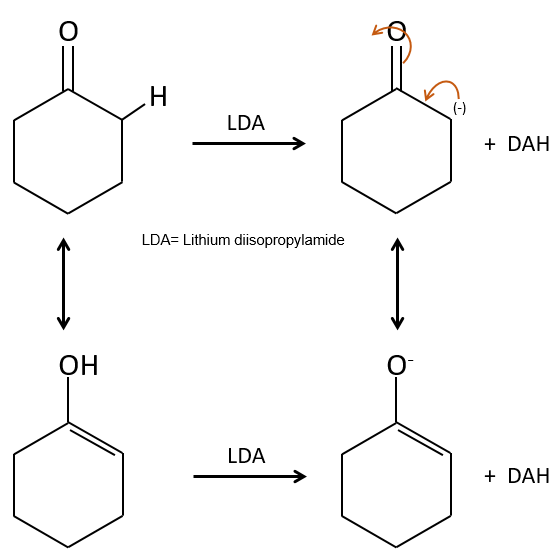 The enolate ion can react by its oxygen or the carbon in α.

Enols are usually unstable and tautomerize into the corresponding carbonyl. It is the enol-ketone tautomerism. The tautomerization is done by acidic or basic catalyse.

The difference of energy is about ΔG=15kcal in favour or the ketone form. The enol-ketone equilibrium can be displaced if one form is stabilised by the structure of the molecule.

The tautomerization allows to modify the conformation of the molecule. A cis molecule tautomerizes to become trans and decrease the steric hindrance.

We can also exchange hydrogen’s for its isotopes because of the tautomerism.

The chemical properties of isotopes are almost identical (because given by the electrons), but some physical properties can be different between isotopes of the same element. The speed of reaction and the ebullition temperature are two examples of properties that change depending of the isotope. It is thus possible to separate the species wearing isotopes by distillation or by centrifugation.

The hydrogen can also be exchanged with halogens through acidic or basic catalyse. In this case, the results are different depending on which catalyst we use.

Once one halogen is on the molecule, it is harder to form the enol because it is more difficult for C=O to catch a proton due to the inductive captor effect of the halogen.

During the basic catalyse, we don’t have to protonate the carbonyl and the halogenation can take place as many times as there are α protons.

We have seen in the previous section that NaH alone doesn’t reduce carbonyls. However it has an effect on the carbon in α of carbonyls. It is a good way to introduce an alkyl group at this position.

A strong base can also take the proton α of carbonyl.

One problem is that the reaction can continue if there are several hydrogen’s in α of carbonyl and polyalkylation is frequent, leading to a racemic mix of products.

Moreover, the regioselectivity is low, giving an additional possibility of product.

To avoid polyalkylation, we can replace the oxygen by pyrrolidine (C4H9N) to obtain the corresponding enamine that has the advantage of a low polyalkylation.

This protection is also effective for aldehydes that are subject to the aldol condensation reaction in basic environments.

If we add a few NaOH in a solution of acetaldehyde, dimers are formed. The first step is the deprotonation in α of carbonyl by the base to obtain the enolate ion that attacks next another aldehyde, leading to the formation of a β-hydroxyaldehyde. The β-hydroxyaldehyde is stabilised by its internal hydrogen bond.

If we heat up the solution, the molecule loses a water molecule to form an enone (double liaison conjugated with a carbonyl).

The analogue reaction for esters is called the condensation of Claisen. NaOH is not used in the present case because it would cleave the ester. We can use sodium ethoxide instead for instance to obtain the enolate ion.

As for the aldol condensation, the enolate ion attacks another ester to obtain β-ketoesters.

The intramolecular reaction is favoured in comparison to the intermolecular one because it does not decrease the entropy.

Such species are stabilised by resonance.

They are way more stable than β,γ-unsaturated aldehydes/ketones that rearrange themselves into the α,β unsaturated compound in presence of a base.

Obviously, the double liaison and the carbonyl groups can go through reactions independently, such as addition reactions for example. 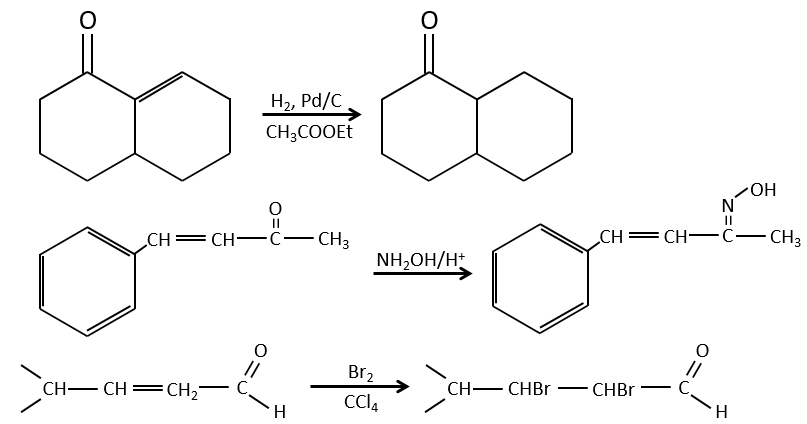 But additions can also be made in several cases on the conjugated system. Those are 1,4 additions.

The nucleophilic attack is possible on the carbon of the double liaison because it is depleted by the conjugation with the carbonyl.

The Michael’s addition is the 1,4 addition of an enolate ion on an enone:

A Michael’s addition can be followed by an intramolecular aldol condensation, the reaction is known as the annulation of Robinson. 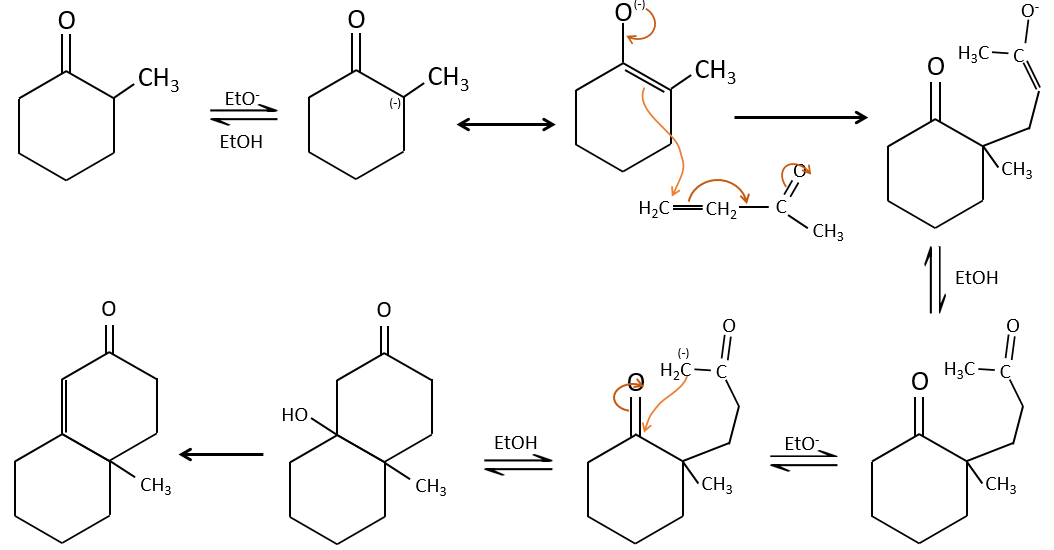