A reaction of elimination is a reaction during which one molecule loses two fragments A and B as a neutral substrate AB.

The two fragments A and B that are removed can be removed from the same carbon, in which case we talk about a 1,1 elimination, from two adjacent carbons (1,2 elimination or beta elimination) or two carbons separated by one carbon (1,3 elimination). The 1,2 elimination is the most common one.

The two fragments are removed from one single carbon. It leads to the formation of a higly reactive carbene.

This reaction is possible because the chlorine atoms take the electrons from the carbon. Because of that, the C-H bond is destabilised and a strong base can remove the proton. 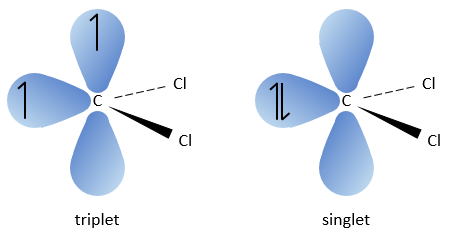 The carbon of the carbene is a singlet and is less stable than a triplet. It will thus react quickly with double liaisons to obtain a cyclopropane chain. A triplet would not be able to attack the π liaison.

The reaction is stereoselective (on the same side of the plane).

The smallest carbene is the methylene that can be produced from diazomethane (check nom anglais). The diazomethane is toxic and explosive so the reaction has to be controlled.

It can also be used to produce methyl esters.

This kind of elimination leads to the formation of new π liaisons. It is the opposite of a reaction of addition. We will only discuss the main reaction of β elimination but there can be other mechanisms involved to obtain such a reaction.

The first step of the reaction is the departure of one anion and the formation of a carbocation. This step is slow and is determining the speed of the reaction.

The second step is the capture of a proton on the adjacent carbon by a base. It leads to the formation of the π liaison to have a neutral species.

We can know if an elimination is of order 1 from

The kinetics is of order 2 and involves a reaction in one step, where the base takes the proton and the departure of the leaving group are simultaneous.

This reaction is only made if the proton and the leaving group are in anti positions.

The argument in favour of the E2 mechanism are

Competition between the mechanisms

As for the nucleophilic substitutions, there is a competition between the two mechanisms. It is not always 100% of E1 but it can be a mix of both, eventually leading to a racemic melange of products. The strength of the base and the steric hindrance influence which elimination mechanism is used: a strong base favours the E2 mechanism while a weak base and steric hindrance favours the E1 mechanism.

Now, the molecules with a good leaving group can often also be the target of a substitution reaction in presence of nucleophiles. There is thus a competition between E1, E2, SN1, SN2 and eventually other reactions. The three main parameters to consider to determine which reactions should occur are the strength of the base, its nucleophilicity and the steric hindrance.

Nucleophiles that are strong bases and that are hindered favour the elimination. 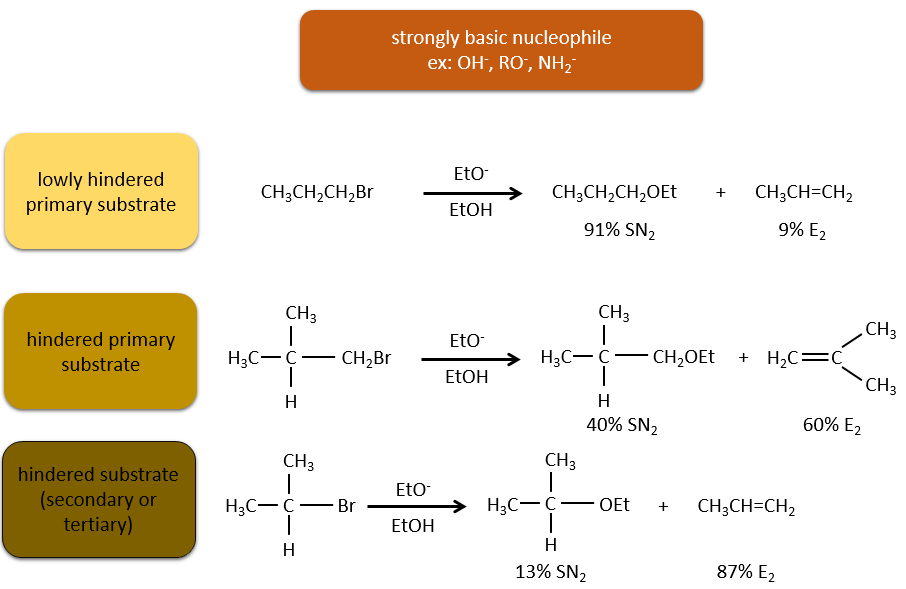 When the carbon wearing the leaving group is not at one extremity of a chain, there can be several possible products. We can predict which hydrogen will be removed.

– There can be exceptions because of steric hindrance

Configuration of the product

In the case of one E2 elimination, the reaction is stereospecific and there is thus only one possible configuration.

In the case of one E1 elimination, the product is more stable if the voluminous substituents are in trans.

This elimination does not occur in basic or neutral environments: OH– is a bad leaving group and we would form –O– in presence of a strong base.

In an acidic environment, the elimination can be done by E1 or by E2. The E1 is favoured in the case of substituted products and the E2 is the main mechanism for primary carbons.

It is one case of 1,3 elimination during which the molecule is cleaved