All the atoms of carboxylic acids groups have a specific character. The group is thus ambident: it possesses two or more alternative and strongly interacting distinguishable reactive centres. It has acidic and basic properties. 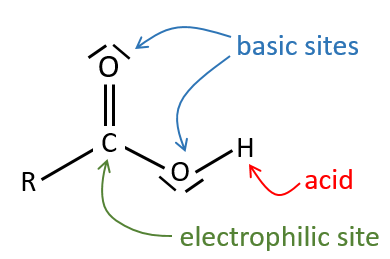 A carboxylic acid is more acid than the corresponding alcohol because the conjugated base, the carboxylate, is stabilised by resonance (pKa≈5 vs pKa≈17).

The oxygen of the carbonyl is more basic than the other one because the positive charge is more stabilised.

There are several ways to form carboxylic acids:

Carboxylic acids can be made by the oxidation of aldehydes or of alcohols. We can use CrO3 or KMnO4 as oxidants for instance.

In acid environments, nitriles react with water to generate new acids and free a molecule of ammoniac.

This method can be used to extend a carbonic chain. Once a carboxylic acid is obtained, we reduce it to obtain an alcohol. The –OH group is removed by nucleophilic substitution and the whole loop restarts. Each loop adds one carbon to the chain.

The derivatives of carboxylic acids are

Carboxylic acids and their derivatives are attacked by nucleophiles on the carbon, as it is done for ketones and aldehydes. However, this addition is followed by an elimination.

It is thus the substitution of one group by the nucleophile at the condition that the group L that was previously on the carbonyl is a better leaving group than the nucleophile.

As for ketones and aldehydes, the reaction can be catalysed by an acid or a base.

Note that the addition-elimination reaction for carboxylic acids is in competition with acid-base reactions. OH– is not a very good leaving group and if the nucleophile is a strong base, the carboxylate is formed. In the case of a nucleophile which is not a good base, there is a competition between the AE and the AB reactions.

Formation of the acyl chloride

From what we wrote just above, we cannot replace RCOOH by RCOCl because Cl– is a better leaving group than OH–. However, there is a trick to make this reaction possible: we use thionyl chloride (SOCl2). The oxygen bound to the hydrogen in COOH is a nucleophile and can attack the sulphur atom, expelling a chlorine that catches the proton on its way. The newly formed chlorydric acid can now react with the thioester, eliminating a molecule of SO2 and of HCl.

The same kind of mechanism is used to produce acid bromine from carboxylic acids and PBr3 (phosphorous tribromide). Yet, those reactions don’t work with HCOOH because the products HCOCl and HCOBr are unstable. They decompose in carbon monoxide and the corresponding acid.

RO– is a slightly better leaving group than OH– so we want to displace the equilibrium towards the right by the use of an excess of alcohol or carboxylic acid and by the removal of water from the system. If we want to do the hydrolysis of an ester, i.e. the reverse reaction, we use an excess of water. It was shown that the hydrolysis of esters works this way (attack of the water on the carbonyl and not an attack of the water on R’) by the use of isotopes for the esteric oxygen.

Another way to obtain esters is the use of diazomethane, reaction that we have seen at the beginning of the elimination chapter.

Intramolecular esterifications are more favourable than intermolecular ones for entropic reasons and are especially favourable if a cycle of 5 or 6 atoms is formed.

Under normal conditions, an amine reacts with a carboxylic acid to form a salt (ammonium carboxylate) through an acid-base reaction. Once the amine has taken the proton, it cannot attack the carbonyl anymore.

If we heat up the system, the reaction goes back and another process, thermodynamically more favourable occurs, leading to the formation of an amide. In an amide, the nitrogen is not basic.

Intramolecular reactions are possible and lead to the formation of lactams.

Reactions of carboxylic acids and their derivatives

From the acyl chloride, we can obtain many other functional groups.

As ester are less reactive than the acyl chlorides, less reactions are available. We can hydrolyse the ester, exchange the esteric chain with another one or generate an amide. 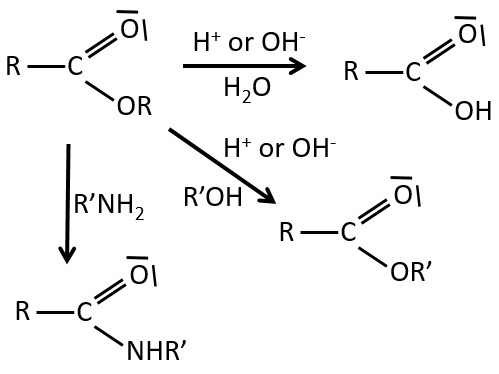 An additional reaction is to use a Grignard reactant on an ester to obtain a tertiary alcohol. The ketone is more reactive than the ester so the reaction continues.

Peptide bonds can be hydrolysed.

The carbon atom from a nitrile is at the same oxidation state than the one of the carboxylic acid. A nitrile in presence of water and acid leads to the formation of a carboxylic acid and the rejection of ammoniac.

Nitriles can also react with reactants of Grignard but the reaction stops at the formation of ketones.

Nitriles can also be reduced into primary amines by LiAlH4.