DNA is a polymer ( a large molecule that contains repeating units) composed of 2’ deoxyribose (a five-carbon sugar), phosphoric acid, and the four nitrogen containing bases denoted A, T, G and C. The chemical structures of the bases are shown below. Note that two of the bases have a double-ring structure, these are called purines. The other two bases have a single-ring structure, these are called pyrimidines.

The purine bases are adenine (A) and guanine (G). 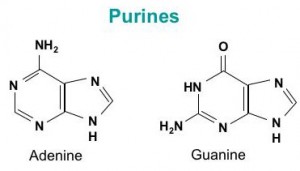 The pyrimidine bases are thymine (T) and cytosine ©.

In DNA, each base is chemically linked to one molecule of the sugar deoxyribose, forming a compound called a nucleoside.

When a phosphate group is also attached to the sugar, the nucleoside becomes a nucleotide . 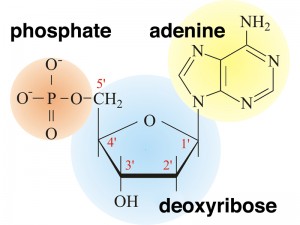 In nucleic acids, such as DNA and RNA, the nucleotides are joined to form a polynucleotide chain, in which the phosphate attached to the 5’ carbon of one sugar is linked to the hydroxyl group attached to the 3’ carbon of the next sugar in line . The chemical bonds by which the sugar components of adjacent nucleotides are linked through the phosphate groups are called phosphodiester bonds. The 5’-3’-5’-3’ orientation of these linkages continues throughout the chain are a 5’-phosphate (5’-P) group at one end and a 3’-hydroxyl (3’-OH) group at the other. The asymmetry of the ends of a DNA strand implies that each strand has a polarity determined by which end bears the 5’-phosphate and which end bears the 3’-hydroxyl. 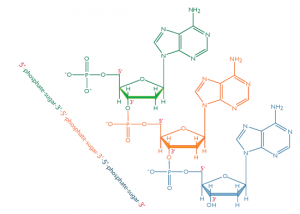 Three years before Watson and Crick proposed their essentially correct three-dimensional structure of DNA as a double helix, Erwin Chargaff developed a chemical technique to measure the amount of each base present in DNA. As we describe his technique, we will let the molar concentration of any base be represented by the symbol for the base in square brackets; for example, [A] denotes the molar concentration of adenine. Chargaff used his technique to measure the [A], [T], [G], and [C] content of the DNA from a variety of sources. He found that the base composition of the DNA, defined as the present G+C, differs among species but is constant in all cells of an organism and within a species.

The amount of adenine equals that of thymine: [A]=[T]

The amount of guanine equals that of cytosine: [G]=[C]

The amount of purine bases equals that of pyrimidine bases: [A]+[G]=[T]+[C]

Although the chemical basis of these observations was not known at the time, one of the appealing features of the Watson-Crick structure of paired complementary strands was that is explained Chargaff’s rules. Because A is always paired with T in double-stranded DNA, it must follow that [A]=[T]. Similarly, because G is paired with C, [G]=[C]. The third rule follows by addition of the other two: [A]+[G]=[T]+[C].

The Physical Structure of the Double Helix :

In the three-dimensional structure of the DNA molecule proposed in 1953 by Watson and Crick, the molecule consists of two polynucleotide chains twisted around one another to form a double-stranded helix in which adenine and thymine, and guanine and cytosine, are paired in opposite strands . In the standard structure, which is called the B form of DNA, each chain makes one complete turn every 34 A. 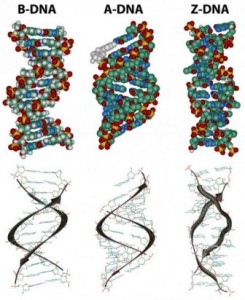 The helix is right-handed, which means that as you look down the barrel, each chain follows a clockwise path as it progresses. The bases are spaced at 3.4 A, so there are ten bases per helical turn in each strand and ten base pairs per turn of the double helix. Each base is paired to a complementary base in the other strand by hydrogen bonds, which provide the main force holding the strands together. (A hydrogen bond is a weak bond in which two negatively charged atoms share a hydrogen atom). The paired bases are planar, parallel to one another, and perpendicular to the long axis of the double helix. When discussing a DNA molecule, molecular biologists frequently refer to the individual strands as single strands or as single-stranded DNA; they refer to the double helix as double-stranded DNA or as a duplex molecule. The two grooves spiraling along outside of the double helix are not symmetrical; one groove, called the major groove, is larger than the other, which is called the minor groove. Proteins that interact with double-stranded DNA often have regions that make contact with the base pairs by fitting into the major groove, into the minor groove, or into both grooves. 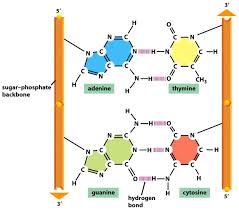 The central feature of DNA structure is the pairing of complementary bases, A with T and G with C. The hydrogen bonds that form in the adenine-thymine base pair and in the guanine-cytosine pair are illustrated in Figure above Note that an A-T pair  has two hydrogen bonds and that a G-C pair has three hydrogen bonds. This means that the hydrogen bonding between G and C is stronger in the sense that it requires more energy to break; for example, the amount of heat required to separate the paired strands in a DNA duplex increases with the percent of G + C. Because nothing restricts the sequence of bases in a single strand, any sequence could be present along one strand. This explains Chargaff’s observation that DNA from different organisms may have different base compositions. However, because the strands in duplex DNA are complementary, Chargaff’s rules of [A] = [T] and [G] = [C] are true whatever the base composition.

Each backbone in a double helix consists of deoxyribose sugars alternating with phosphate groups that link the 3’ carbon atom of one sugar to the 5’ carbon of the next in line. The two polynucleotide strands of the double helix are oriented in opposite directions in the sense that the bases that are paired are attached to sugars above and below the plane of pairing, respectively.   offset because the phosphate linkages in the backbones run in opposite directions , and the strands are said to be antiparallel. This means that each terminus of the double helix possesses one 5’-P group (on one strand) and one 3’-OH group (on the other strand), as shown in Figure below : 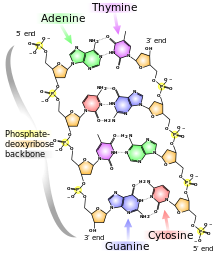 The diagrams of the DNA duplexes are static and so some-what misleading. DNA is a dynamic molecule, constantly in motion. In some regions, the strands can separate briefly and then come together again in the same conformation or in a different one. Although the right-handed double helix   is the standard form, DNA can form more than 20 slightly different variants of right-handed helices, and some regions can even form helices in which the strands twist to the left (called the Z form of DNA). If there are complementary stretches of nucleotides in the same strand, then a single strand, separated from its partner, can fold back upon itself like a hairpin. Even triple helices consisting of three strands can form in regions of DNA that contain suitable base sequences.

What a Genetic Material Needs That DNA Supplies :

Not every polymer would be useful as genetic material. However, DNA is admirably suited to a genetic function because it satisfies the three essential requirements of a genetic material. First, any genetic material must be able to be replicated accurately, so that the information it contains is precisely replicated and inherited by daughter cells added to the end of a growing protein molecule. In DNA, this is done by means of a genetic code in which groups of three bases specify amino acids. Because the four bases in a DNA molecule can be arranged in any sequence, and because the sequence can vary from one part of the molecule to another and from organism to organism, DNA can contain a great many unique regions, each of which can be a distinct gene. A long DNA chain can direct the synthesis of a variety of different protein molecules.

A genetic material must also be capable of undergoing occasional mutations in which the information it carries is altered. Furthermore, the mutant molecules must be capable of being replicated as faithfully as the parental molecule, so that mutations are heritable. Watson and Crick suggested that heritable mutations might be possible in DNA by rare mispairing of the bases, with the result that an incorrect nucleotide becomes incorporated into a replicating DNA strand.