This section is a full part of the course and contains some reactions that were not addressed in the main course. It is challenging to understand by yourselves some mechanisms with the hints that are in the exercises. If you don’t succeed, don’t worry. The solutions and the description of the reactions are directly following each exercise. However, the parts that have been seen in the course are considered as known and may not be explained in details.

The principle of the following exercises is pretty simple (but the exercises are not): We give you a series of reactions that are following each other but we will only give you some of the reactants and/or of the products. From them you have to reconstruct the whole process and find out which molecule and which structure hide behind which letter.

A→B: Two sets of protons are more acid than the others: the protons in α of carbonyl. The protons from CH3 are less acid than the CH2 because CH2 is between two carbonyls. It is thus there that the base attacks. The negative carbon attacks next the formaldehyde. A rearrangement occurs after the neutralisation to obtain B and H2O.

B→C: The first step is identical than for the previous reaction and the two molecules merge together. The attack is done on the sp2 carbon and we obtain a structure that is stabilised by a H bond forming a cycle between the OH and the C=O.

C→D: This time the proton (denoted *) is not attacked by the base because removal of one methylic proton allow the formation of a cycle of 6 carbons. In the second step, the acid catalyses the loss of a water molecule to obtain a double liaison conjugated with the carbonyl.

D→E: The double liaison is reduced to obtain a cyclohexane.

E→F: The esters are turned into carboxylic acids with a basic catalysis. CO2 is lost if we increase the temperature.

F→G: Zn reduces selectively a ketone into an alkyl chain.

G→H: The diazonium carbene (check nom) is able to take the proton from the acid. The carboxylate attacks next the carbene to form a methyl ester and to free N2. CH3OH leads to the same result but the process is different: There is a nucleophilic substitution on the carbonyl to replace -OH by -OCH3.

2. This exercise focuses on reactions on aromatics and on carboxylic acids and their derivatives.

A→B: The electrophile character of Br has to be enhanced by an acid of Lewis to do the reaction.

C→D: the reduction is limited to the nitro group that turns into an amine. To reduce completely the aromatic ring we have to heat up the solution to 300°C. 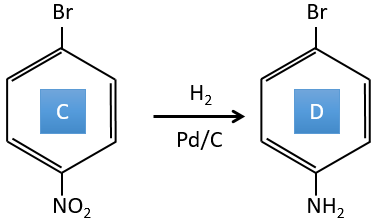 D→E: NaNO2 does not add a nitro group on the ring. It leads to the removal of the amine and the formation of an arenium. This very reactive species reacts with water to replace the amine by a hydroxyl group –OH.

E→F: The base takes the proton of the p-bromophenol. There is then a nucleophile attack by the anion on CH3I to obtain the p-bromometoxybenzene.

A→G:  It is the chloromethylation reaction. During this reaction, the formaldehyde and the chlorydric acid form a chloromethanol stabilised by ZnCl2. The acid protonates the alcohol and the ring can attack it to reject water and bind CH2Cl. 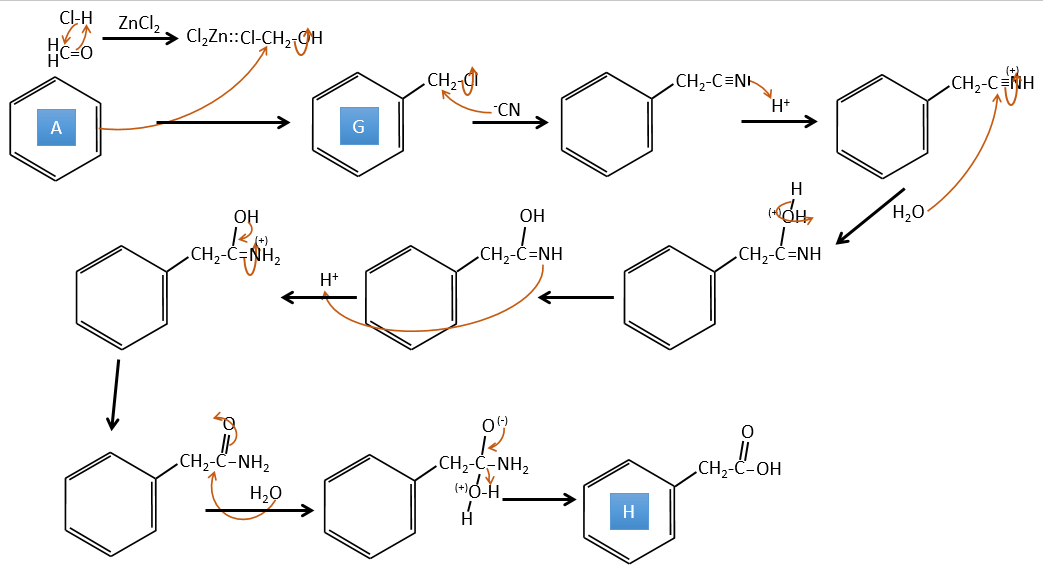 H→I: SOCl2 is a molecule that allows us to obtain an acyl chloride from an acid. It cannot be done with HCl or Cl2 because Cl– is a better leaving group than OH–.  The reaction is followed by the formation of a primary amide.

I→J: The amide is reduce into an amine by LiAlH4. LiAlH4 can generates H– that attacks the carbonyl.

E+G→K: A base takes the proton from the bromophenol to obtain a stronger nucleophile. A SN2 takes place between the two species to merge them into one molecule.

G→M: The second step of the reaction leads to the formation of the carboxylic acid as it was the case in the reaction G->H. The missing element on M is the nitro group in meta. This position is favoured because of the mesomeric captor effect of the COOH through the CH2. The effect is however smaller than for a mesomeric captor directly in contact with the aromatic ring.

3.  In this exercise the last product of a long series of reaction is given. It is the direct product of a reaction of ozonolysis. You have thus to go backwards in the reactions, starting from the end to find the reactants of each reaction. The formulas of most of the molecules are given. G1 and G2 are isomers. 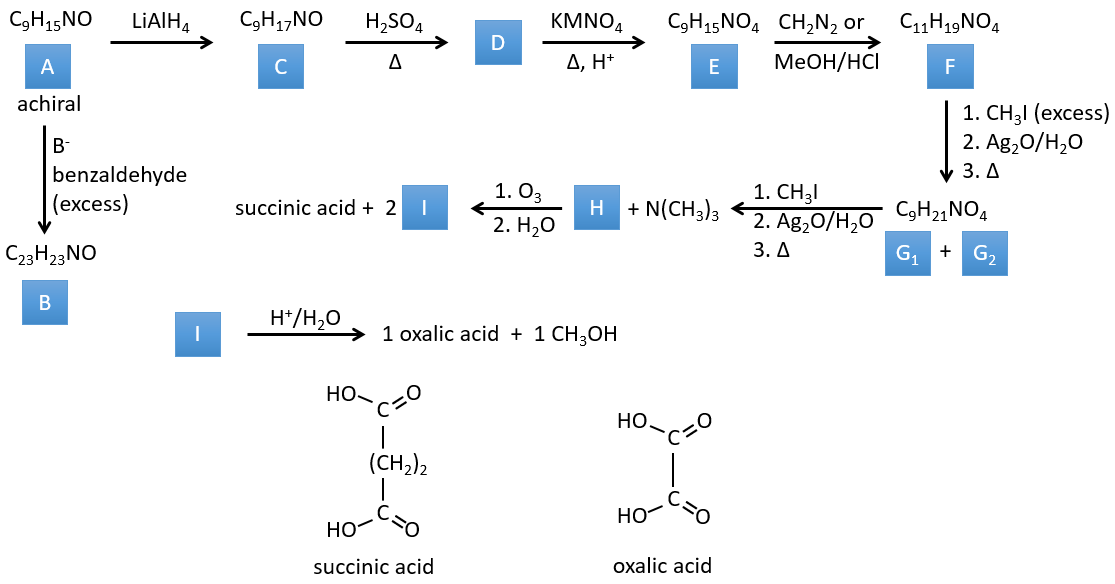 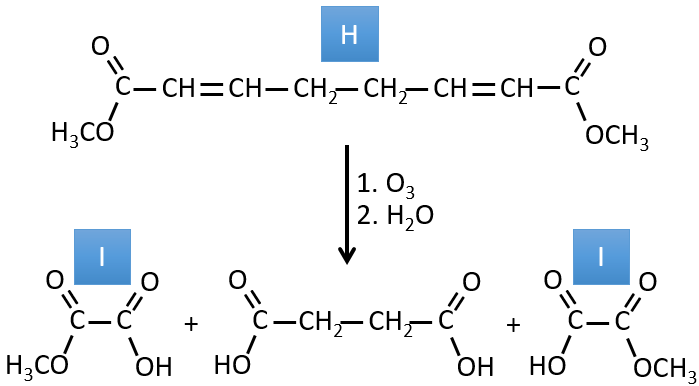 G→H: G1 and G2 are two isomers. There are two other information that we may consider to find the isomers. CH3I, Ag2O and delta are the reactants of the Hoffmann reaction. This reaction breaks one C-N bond and forms a double liaison on this carbon. It is thus one of the pi liaisons that the nitrogen was bound. The second information is that the nitrogen is no more on the product, meaning that it had only one liaison with the chain. The second product of the reaction, N(CH3)3, confirms that. The two isomers are thus different from the carbon on which N(CH3)2 was bound. It can be the carbon in α or in β of carbonyl.

F→G: It is the same reaction than G->H but the nitrogen is still on the molecule after the reaction. It means that it was bound somewhere else on the molecule. The location is where the pi liaison stands. The molecule had thus a cycle of 6 atoms prior to the reaction. Contrarily to the species H, the cycle F is not symmetric. It is why we can obtain two isomers G1 and G2.

D→E: KMnO4 acts like the ozone. The two carboxylic acids were thus forming one bridge of the cycle. This bridge also forms a cycle of 6 atoms at the side of the nitrogen (and a cycle of 8 carbons with the other side).

C→D: If we check the compositions of the reactant C and of the product D, we see that there is a difference of H2O. The role of H2SO4 was thus to remove this molecule of water from C with the formation of a double liaison. The hydroxyl group could be at two places (in α or β of the bridged carbons). At this point, we cannot say which position is correct but the reaction A->B is only possible with the hydroxyl group in β of the bridged carbon. The species is thus symmetric and achiral as is the species A.

A→C: A classic reaction of reduction. A gets H2 in the process and we can assume that the hydroxyl group was a ketone before the reduction.

A→B: The base is there to remove a proton in α of carbonyl. Those protons are acid in reason of the tautomerism enol-ketone. The carbanion attacks one benzaldehyde on its carbonyl and water is lost after this attack.  The double liaison is in α of carbonyl and forms a long resonance chain with the phenyl. This reaction can be repeated on the other side of the carbonyl to obtain the product B.

4. There are a few specific reactions in this exercise (mainly BàE). You have the formulas of all the compounds but only the structure of the compound K to start with. HNO3, ΔT is a reactant that breaks the C-C liaison of a ketone to obtain two carboxylic acids. The mechanism is unknown.

H→K: As explained in the wording, HNO3 breaks a ketone into two acids.  As the two acids are present in the product, H is a cycle with a ketone on it. The cycle has 6 carbons.

H→I: This reaction leads to the formation of an oxime, i.e. a base of Schiff where R=OH. The mechanism involves a nucleophilic substitution by the nitrogen on the carbonyl to reject one water molecule.

I→J: This reaction is the transposition of Beckmann. Under acid conditions, the OH of the oxime is protonated and water is freed. The cationic nitrogen is attacked next by a carbon in alpha of the oxime, placing the nitrogen into the chain. The water comes back to attack the carbocation and to form an amide.

G→H: A simple reaction to change an ester into a carboxylic acid. The group is then removed from the molecule by an elevation of temperature.

F→G: A proton in α on carbonyl is taken by the strong base. The formed anion attacks next the ester to form a cycle of 6 carbons wearing one ketone and one methylic ester.

D→E: Ag2O is able to oxidize an aldehyde into a carboxylic acid.

C→D: Pb(AcO)4 is a compound that reacts with cis-glycols. Pb exchanges one equivalent of acetic acid to bind with one oxygen. The process is slow but it will also bind with the second OH to form a cycle of 5 atoms. This cycle breaks to generate 2 ketones that are now separated. The same mechanism is obtained with HIO4. As there is only one product, the he reactant is thus a cyclic cis-glycol.

B→C: The osmium tetroxide is a reactant that affects specifically C=C and that generates an osmic ester, a bit like the complex formed by Pb(AcO)4 with the cis-glycol. Na2SO3/H2O removes the osmium from the molecule to obtain the cis-diol. KMnO4 can do the same but we have to be in basic and cold conditions or we will obtain a diacid. The reactant is thus a cycle of 7 carbon with a double liaison between two of the carbons.

A→B: This reaction is simply the removal of a molecule of water from the cycle that gives a double liaison. We can deduce this from the difference of composition between the reactant and the product: C7H14O-C7H12=H2O.