In this chapter, we will discuss  some procedures used to separate and identify ions/groups of interest in solutions composed of several molecules. We will describe one method for mineral compounds and one for organic compounds. I have no real doubt that nowadays mass spectrometers can probably do the job and with a quantitative result, but these procedures are a good way to show how to use the differences of properties between species to isolate them.

It should be obvious to any chemist, but laboratory manipulations involve the security of each person in the lab and the careful manipulation of equipment and compounds: wear the appropriate protective clothing (laboratory jacket, gloves and glasses) and be aware of your environment.

The method involves a separation of the compounds by the formation, or the absence of formation, of a precipitate in given conditions (temperature, reagents). The concentration of the sample should typically be about 0.1M with a volume about 1ml. Careless work may produce precipitates of the wrong colour or precipitates when there should be none, and eventually lead to the loss of too much solute in the sample to obtain results. The identification tests are ineffective if you do not have at least 1mg of solute present (~10% of the initial sample mass). The goal is not a quantitative identification so the volumes we will use don’t have to be very precise and involve small quantities. As a result, we don’t use graduated cylinders to measure the reagents but droppers. They are tested to determine how many drops of volume are needed to give 1 ml of liquid. It should typically be between 20 and 23.

When we obtain precipitates, we will separate the precipitate from the solution (centrifugation is preferred to filtration) and keep both for further studies. If we obtain a precipitate, we want to be sure that all the species supposed to precipitate actually does because it can interfere with further experiments. We let enough time for the precipitate to form (it can sometimes be slow), separate it from the solution and then add a few droplets of reagent to make sure everything is in the precipitate. It is possible that two different ions form precipitates with a single reagent, but they have not the same constant of formation, so one species will precipitate first and then the second if there is an excess of reagent. In our procedures it is usually not important because we will separate the two species later and identify them.

The separation is made by centrifugation that causes the heavy precipitate to be thrown to the bottom of the tube while the lighter liquid remains on top. The test tube must always be balanced in the centrifuge by a tube containing a similar volume of water. 15 to 30 seconds of centrifugation should be enough for most of the compounds but it is not always the case. The liquid should be a clear supernatant liquid. If it is not the case we continue the centrifugation. The last drop of decantate should be removed by gentle tapping from the lip of the tube if the precipitate is packed enough. If the precipitate is light and fluffy, it is better to allow the supernatant liquid to remain behind with the precipitate. In the worst case of a light precipitate, badly packed, we take the top 75-80% of the liquid with a medicine dropper. Absolutely avoid particles of precipitate if further tests are to be made on the solution. The solid is then washed (often with water) to avoid contamination and centrifuged again. It is best to wash the precipitate twice. Centrifugations can also be repeated on the decantate if furthers investigations have to be made on it.

To transfer a solid, for instance into a tube for centrifugation, we stir the solid well to form a slurry and then quickly pour it into the other container. It should move 90% of the sample and as the analyses are not quantitative, we can forget the last 10%.

Several operations will require a heating. Test tubes are never directly put in contact to the flame of a Bunsen: the content would become overheated and splatter out of the tube. It is safer to heat a volume of water and to place the test tube in this Bain-Marie. When we want to evaporate a liquid (to concentrate the species or remove a volatile reagent), we perform it under the hood (hotte). Never heat to dryness or the sample may decompose or become inert.

To control the pH of the solution, we simply touch a litmus paper with the tip of a stirring rod. The acidic or basic reagent is added drop by drop until you think the pH is about right. Mix the solution with the stirring rod and check the pH. Several properties of the solution may change because of the pH variation: colour, “transparency” or apparition or dissolution of a precipitate.

For our experiments, we keep some materials available:

Now that all of this is said, we can detail the experiments. Let’s consider a solution containing an unknown number of unknown cations. We separate the ions into several groups in function of the formation or the absence of formation of a precipitate during the reaction with one specific reagent. Several cations may form a precipitate with the same reagent, forming a group that we separate next. Cations that don’t form precipitates with this reagent belong to other groups of cations that form precipitates with other reagents in further reactions. The separation by group must be done in the correct order to avoid any disturbance from the ions that should not be in solution anymore. The global scheme of reactions is showed in the following figure.

Each procedure gives a precipitate (double line) and a decantate (simple line). Doted lines indicate reactions of separations of the cations of the group.

The first group includes Ag+, Pb+ and Hg22+. Let’s first take a look at the properties of the ions of this group.

Description of the elements of the silver group

The most common oxidation state of silver is 1+. Silver compounds are, for most of them, insoluble in water (common exceptions are AgNO3 and AgF that are very soluble, and Ag2SO4 slightly soluble). To dissolve them, we add cold 6M HNO3 (exceptions: AgSCN, Ag2S and silver halides). The compounds are usually white, some exceptions are

Silver ions can form stable complexes in which the coordination number of the silver is 2 (AgL2). The best known is Ag(NH3)2+ that can be produced from AgCl or AgSCN treated with 6M NH3. It is a reaction useful to dissolve those solids. AgBr and AgI are less soluble than AgCl (respectively soluble in 15M NH3 and insoluble even in aqueous NH3).

Pb has two oxidation states, Pb2+ (most common) and Pb4+. Most compounds of Pb2+ are insoluble in water. Lead nitrate and acetate are the only well-known soluble lead salts. PbCl2 is less soluble than AgCl and becomes moderately soluble if the solution is heated. Lead forms a stable hydroxide complex ion Pb(OH)42+ and a weak chloride complex PbCl42-. Common lead(IV) compounds are PbO2 (insoluble in most reagents, but well in 6M HNO3 with H2O2).

Mercury has two stable oxidation states Hg22+ and Hg2+, both common. Mercury(I) is a member of the Silver group and Mercury(II) belongs to the copper-arsenic group. Most mercury(I) salts are insoluble (exception: Hg2(NO3)2). Mercury(I) is susceptible to a simultaneous oxidation-reduction process (disproportionation)

This reaction occurs readily in the presence of species that form insoluble precipitates or stable complex ions with mercury(II). When disproportionation of Hg22+ occurs, metallic mercury is formed as very small droplets, giving a grey colour to the mixture.

Analysis of the silver group

Chlorides of ions of this group are insoluble in cold water and cold, dilute HCl. The other cation chlorides are soluble in this kind of solution so we can separate the silver group ions from ions from the metallic ions of the other groups with the addition of 6M HCl (or some other soluble chloride) to a cold sample. The procedures will be described in detail later in this section. They are given in the correct order to separate all the ions of the silver group. The same will be done for all the analysed groups. 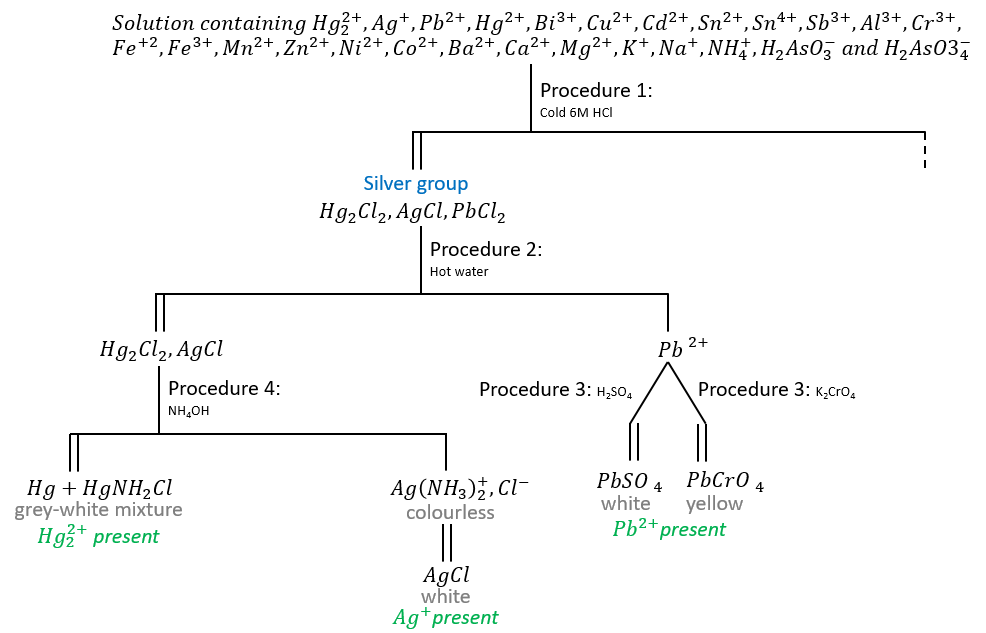 We want now to isolate the ions from the Silver group one from each other. AgCl, Hg2Cl2 and PbCl2 precipitates are all white so we cannot discard any possibility based on the colour of the precipitate. We have to proceed to additional investigations. The first step is to add hot water to the solution. In any precipitation process, the insoluble compound will keep precipitating until the concentrations of its ions remaining in solution reach values at which their product just equals the solubility product. When this point is reached, the precipitate will be in equilibrium with its ions, which means that the rate at which the precipitate is forming equals the rate at which it is dissolving and dissociating into ions. As any equilibrium, it can be shifted by changes of concentrations (excess of Cl– to remove a maximum of the ions from the solution) or a change of temperature. Note that a too large excess of Cl– may generate a soluble complex (PbCl42-, AgCl2–) from the precipitate. 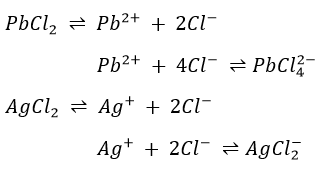 Procedure 2: separation of lead from the other silver’s group ions

Add 15-20 drops of hot water to the test tube containing the precipitate, stir well until all the precipitate is in suspension, and then heat the tube in a beaker of boiling water for 1 minute. Stir frequently.

Centrifuge and decant into another test tube. The decantate may contain Pb2+, possibility that we will confirm in Procedure 3. Wash the precipitate twice with 10-drop portions of hot water. It will be analysed in Procedure 4.

Procedure 4: detection and separation of Ag+ from Hg22+

Silver chloride, AgCl, is soluble in aqueous NH3. Also Hg2Cl2 reacts with aqueous NH3 to form Hg and HgNH2Cl, both of which are insoluble. These facts are the basis for the separation of silver from mercury(I) ions.

Silver chloride dissolves in aqueous ammonia according to

When a solution containing the complex ion Ag(NH3)2+ and Cl– is acidified with nitric acid, AgCl is precipitated in accordance with

Formation of the complex is an example of a type of reaction that will be encountered in connection with the detection of other ions. Similar complexes are Cu(NH3)42+, Co(NH3)63+,Ni(NH3)42+, and Cd(NH3)42+.

Then, HgCl2 reacts with aqueous NH3 to form HgNH2Cl.

Add 4 drops of 15M aqueous NH3 to the precipitate from Procedure 2, mix thoroughly, centrifuge, and decant into another test tube, saving the decantate for testing for silver. A grey residue proves the presence of mercury(I). To the decantate, add 16M HNO3 drop by drop and mix constantly with a stirring rod until slightly acid. A white precipitate proves the presence of silver.