Nowadays, we find polymers everywhere. They can be solid or flexible, resist to low or high temperatures but are generally lighter than the materials they replace. For instance, wood or metallic chairs are advantageously replaced by plastic chairs. Plastic bags are in every shop (yet also in oceans or forests) and can support heavy charges without problem (when they break, it is usually because of a cutting edge). The development of the polymers was truly a revolution in our lives and we can difficultly imagine a turn back.

Polymers are derivatives from petroleum and are made of small blocks called monomers. Monomers are small molecules, usually gaseous, wearing a functional group that can give some properties to the polymer. The monomers composing a polymer are added one by one to the polymer that grows in length. We will see the reaction a bit later. Due to their huge size, the polymers are solid. To write the formula of a polymer, we write the smallest constituting block between brackets, that block being present n times in the polymer. Note that for one reactor, the lengths of the produced polymers are not all identical. We will obtain a distribution of size and n is thus not a fixed value.

Here are some of the usual polymers and the monomers they are made of. 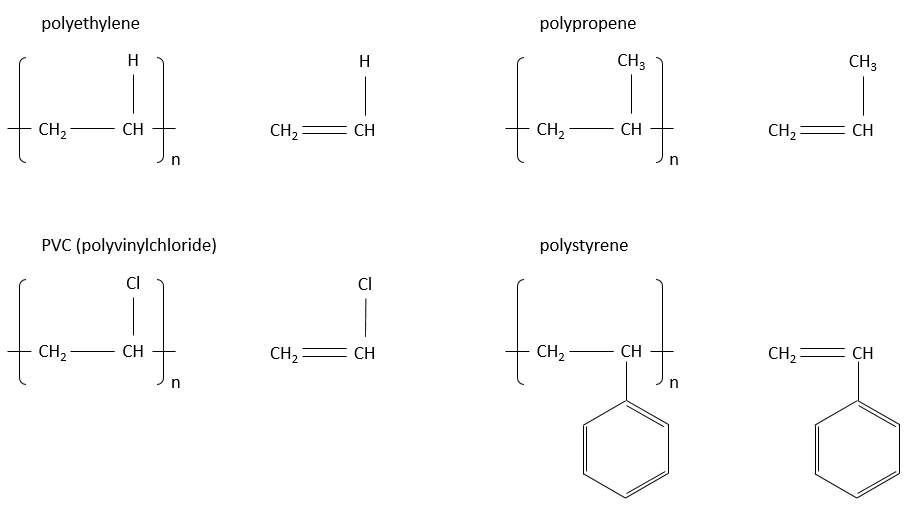 The properties of a polymeric material are given by the interactions between the chains of polymer. Chains can be linear of branched. It is possible to make polymers with several different monomers. There are several ways to obtain such polymers. The monomers in the chain can be put 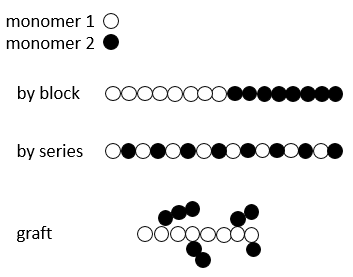 As written above, the properties of the polymers depend on the interactions between the chains. If there is no interaction at all, the chains freely move along each other, without resistance and if we stretch the material by two opposite sides, it will expend and break. The same happens if chains have physical attractions between each other. Those can easily be broken by a heating or by force. This kind of material is called thermoplastic.

Liaisons can be made between the chains. If there are only a few of them, when we stretch the material it will expend up to a point where the liaisons block any further movement. They prevent the material to break as easily as a thermoplastic one. Such a material is called an elastomer.

If there are more than a few liaisons, the material becomes more rigid and the rigidity increases when we heat it up. It is called a heat-hardening material.

The elasticity/rigidity of polymers are determined by a stress-strain curve. A machine stretches the material while the applied force and the stretching (or strain) of the material are measured. The material should have the geometry of a cylinder to avoid problems related to symmetry. Instead of force, we measure the pressure (or stress) R=F/S where S is the surface of the base of the cylinder. 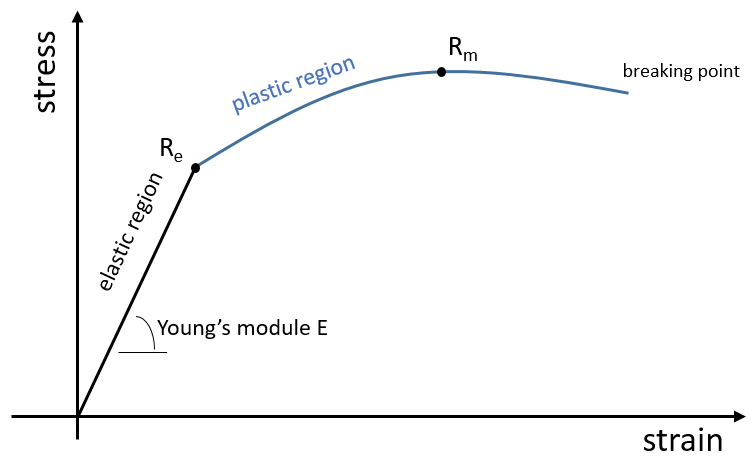 In a first time, the deformation is elastic and the variation of the length of the sample ΔL is directly proportional to the applied force F. The slope of this curve gives the module of Young E that is a characteristic of the elasticity (in the given direction) of the material. If the force was to be removed, the material would get back to its initial form. It is thus a reversible process.

Next, the curve softens and the deformation is no more an elastic deformation but a plastic deformation: the material is deformed by the applied force and cannot get back to the initial state. The variation of slope can be slight or massive. This region is called the strain hardening region and the point where the slope changes is called the elasticity limit Re. The curve should rise up to a maximum Rm called the ultimate tensile strength. Yet all the nodes don’t always break at the same time and we can see the apparition of plateaux on the curve. At Rm, the liaisons binding the polymers are all broken. The experiment continues until the material is broken in two distinct pieces.

The ductility refers to the way a material breaks. Heat-hardening materials breaks at once, after a short elastic region (with a large Young’s module E): because of all the liaisons, the material is not flexible but when the stress is large enough, the material breaks directly in two pieces. In the case of ductile materials, the sample becomes thinner and longer before the fracture. As a result, the curve continues further after Rm. 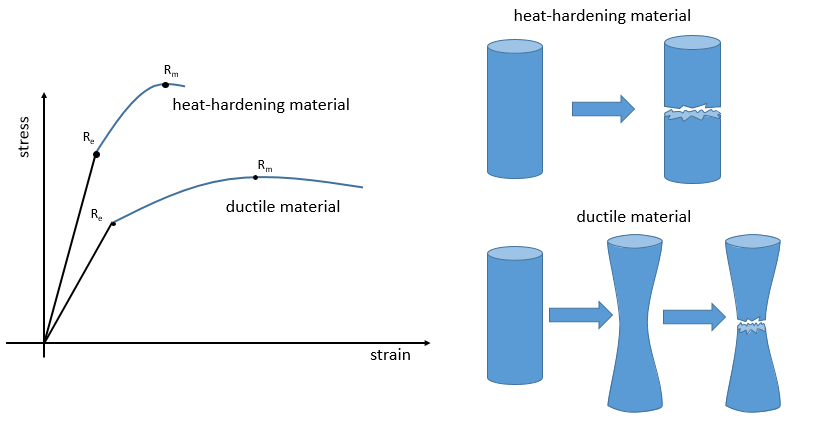 The parameters that influence the properties of polymers are 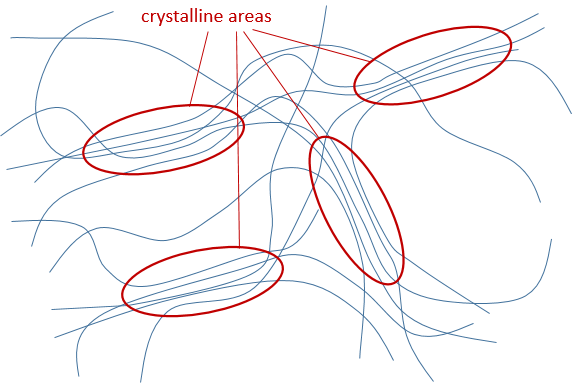 The synthesis is composed of 3 main steps: the initiation, the propagation and the termination step.

An initiator is mixed with the monomers. In the case of the radical polymerisation, the initiator is a radical. This radical can be generated by thermal decomposition or by photolysis.

For instance, benzoyl peroxide (BPO) can be homolytically cleaved by an elevation of temperature or by a laser of a given frequency.

In fact, the produced radical rearranges to free CO2.

The radicals react with one monomer, transferring the radical to the other side of the molecule.

From that point, we have a beginning of chain that wears a radical and that is able to attack monomers. It is the propagation step:

As there is still a radical at the end of this reaction, it goes on and on, increasing the length of the chain by one monomer each time the reaction takes place. A chain stops to grow when the radical is neutralised. It is the termination step. During this step, two growing chains react together. It can happen two ways:

Termination: the two chains merge together

In the case of polymers:

The process is quite different from the polyaddition. In this case, the monomers wear a functional group at both extremities. The functional groups can react with the ones of the other monomers to condensate together. For instance, a carboxylic acid condensates with ah alcohol to form an ester and water.

If the alcohol was replaced by an amine group, we would obtain an amide that is also the usual bound between peptides and thus called a peptide bond.

The production of polymers is an exothermic process: we create new bonds. However it decreases the disorder as there are less molecules in the system. As a result, the production of polymers has to be performed in a given range of temperatures. The temperature can be approximated from the type and the concentration of monomers. Indeed, except at the very beginning of the reaction, we have that the concentration of two polymers of similar sizes are approximately equal.